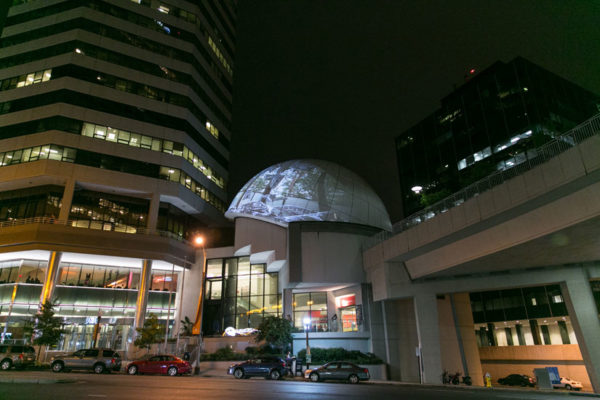 While the Arlington County Board enters their final deliberations surrounding the potential closing of the Artisphere, one local entrepreneur is trying to save it.

Pete Erickson is the founder of MoDev, which organizes conferences for mobile software developers. Erickson has hosted a handful of conferences at Artisphere and is planning his latest — MVP (minimum viable product) Conference — for May 18 and 19.

When Erickson heard that County Manager Barbara Donnellan recommended defunding the arts and events venue in Rosslyn, and then realized that no one else seemed to share his vision for its business potential, he could no longer sit idly by.

“I thought I’d wait to see what was going to happen, who was going to come around and just kind of keep tabs on things,” he told ARLnow.com yesterday. “Nothing concrete has come from any other parties. The county is nearing a vote, and they’re under a lot of pressure to cut costs where they can. As that reality began to hit, I sprang into action and said ‘I’ve got a big enough network here to pull together the partners we would need to turn Artisphere into a destination technology, incubation and events hub.’ “

Erickson’s efforts — first reported by Technical.ly — stem from what he’s already been able to do at Artisphere: host events that attract as many as 1,000 attendees. In the D.C. area, there is no place like it.

“It’s hard to find space for a medium-sized conference, which is less than 1,000 people — and 95 percent of all conferences,” he said. “There’s a number of reasons why Artisphere is really well-suited for conferences. Artisphere is a unique space, and you can bring in outside catering, which is a big opportunity, it’s got an IMAX theater, it’s got a black-box theater, an open-air ballroom. It is a good confluence of several things. It’s also hard to find space that’s right on a Metro, close to D.C. and also accessible from the west.”

Erickson is thinking bigger than conferences, too. He has ideas for innovation labs that would bring companies and individuals in during the week, partnerships with incubators like 1776 in D.C. to collocate member businesses. It could turn into its own incubator, and there “could be events happening all the time.”

The 62,000-square-foot arts center opened at a cost of $6.7 million in 2010 and has been losing money ever since. It was opened up to non-arts events in 2011 — paving the way for MoDev’s conferences — but still is a budget boondoggle for the county.

The County Board appears ready to support Donnellan’s decision — it voted 4-1 in favor of closing Artisphere at a work session earlier this week — but Arlington Economic Development is hoping Erickson can come up with something concrete before it’s too late.

“Right now, it’s just an idea. It’s not even a proposal,” AED Director Victor Hoskins told ARLnow.com yesterday. “The idea is attractive. How you execute it is the question. That’s a much bigger investment than the $250,000 [D.C. invested] in 1776 in 2011.”

“I think MoDev could pull it off, because that’s what they do,” Hoskins added. “But we haven’t even seen a proposal. That’s what we would be looking for.”

Erickson has collected signatures from 100 D.C. entrepreneurs to support his proposal. He’s not the only one to have thought of something along those lines, however. Hoskins has been Arlington’s chief economic development officer for 10 weeks, but his team was exploring similar proposals for the center, he said.

“It’s something we thought about and that we think is viable,” he said. “That’s why the concept is so exciting, especially with a private party curating it.”

Artisphere’s acting director, Josh Stoltzfus, declined comment, referring a reporter to Arlington Cultural Affairs spokesman Jim Byers, who said Hoskins would speak on behalf of the county’s arts faction. Erickson said he’s a “huge supporter of the arts” and promised that any new Artisphere concept would include art elements.

The County Board will approve a budget on April 18, and that budget will include Artisphere’s future. If Erickson’s proposal doesn’t come through in time, Artisphere will close for good on June 30. Erickson, when speaking about his plans, did not couch his answers with “ifs” and “coulds,” speaking in definitive terms like “will” and “going to.”

“I’m an entrepreneur and a visionary, and that’s how I operate,” he said. “I’m setting my sights on this not to try to do it, but to do it. Nothing is set in stone. But I’m holding out hope that this can come together and be a really great things for the region, the citizens of Arlington, the taxpayers and the businesses.”