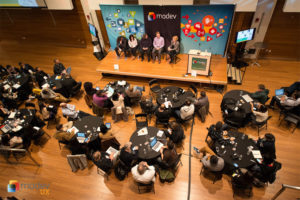 An Arlington startup focused on software developers for mobile platforms was born when the iPhone 2 was the newest smartphone on the market and Blackberry devices were everywhere.

MoDev started back in January 2009 not as a company, but as a Meetup group of a dozen mobile developers in Piola in Rosslyn. The idea was to start a community for developers building mobile application, a vacuum in the D.C. area at the time, MoDev founder Pete Erickson said. The aim was to generate conversation and collaboration among developers in the “new ecosystem.”

“I didn’t plan to run it as a business, it just kind of happened.,” Erickson said. “After doing it for about a year, we had over 1,000 members and people started bringing us money because they were looking for developers and wanted to sponsor our group.”

The first sponsorship was a $50-per-month agreement with Blackberry, and the others started to roll in. Erickson was consulting and launching another startup, Disruptathon, but by 2011, it became clear that MoDev was poised for big enough things for him to jump on full-time and steer the ship.

In December 2011, MoDev organized its first conference, a 350-person affair at Gannett in Tysons Corner. Since then, the company has curated almost 40 conferences around the world with tens of thousands of combined attendees. Several have been at Artisphere in Rosslyn, which is why Erickson is leading the charge to save the arts venue from extinction.

The conferences have ranged from mobile development to wearable technology to exponential growth, the key theme of MoDev’s future, Erickson said, as well as the entire startup industry’s. 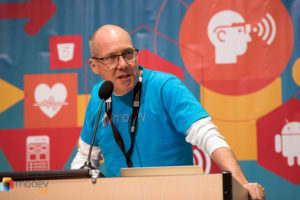 “We’re watching a whole bunch of industries transform in a number of years,” Erickson said, citing Uber, AirBnB and Waze as exponential-growth startups that have had groundbreaking impacts on their respective industries. “The opportunity to manage products in an exponential world is vastly different and exciting. It’s actually very daunting, and we think the whole skill and method of developing exponential products is so different, there needs to be a conference that addresses it.”

That idea — having a need for conversation and collaboration surrounding an issue — has always been the impetus for MoDev.

Erickson said the mobile development community in D.C. had to come together when he started MoDev, which has been bootstrapped from the beginning, because that’s the only environment in which true innovation can flourish.

“You want to bring people together as often as possible, because that’s when ideas get born,” Erickson said. “It’s always rewarding for me to hear the testimonials of people who have gone on to build great apps together, be successful together, or even just try together.”

Among the companies that have benefitted from MoDev’s services are local startup success stories LivingSocial and WeddingWire. Other MoDev community members including Rosslyn-based TMSoft Founder Todd Moore and Reston-based app development company SavvyApps. 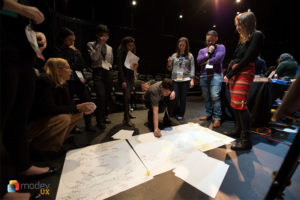 In addition to organizing their own conferences around the world — including through a chapter in Hong Kong — MoDev also organizes conferences and events for others. Clients include Google, Amazon Samsung, Microsoft and Capital One, which is sponsoring MoDev’s Minimum Viable Product conference, coming to Artisphere next month.

“We’ve watched some of the largest companies in the world use MoDev to reposition themselves,” Erickson said. “We’ve got an impressive roster of companies we’ve worked with to help them build their development.”

More than just conferences, MoDev also helps these companies strategize about their mobile development goals, and what they need to become successful in the changing landscape.

Erickson has called himself a “visionary,” and he’s constantly thinking forward. He operates MoDev and his team from his home office in Arlington, and they don’t even use email anymore.

“We live in an exponential time, and we’ve shifted our company from linear to exponential,” he said. “Understand all that and knowing how important it is to be successful today, we’re going to inject this exponential conversation into everything we do.”