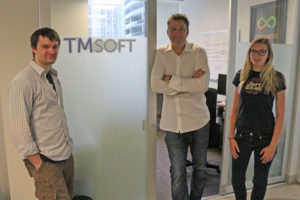 (Updated at 2:20 p.m.) Mobile applications have become a major sector of the technology industry in the last few years, but when TM Soft Founder Todd Moore got his start, there was no book, no blueprint on how to run a successful app company.

Moore was working as a software developer in federal contracting when, in 2008, he decided he would try and build an iPhone app to help him sleep. This was in the early days of iPhones, when they were running iOS 2.0, the first iteration to include the app store.

“I was teaching myself how to create apps late night weekends and just doing it for fun,” Moore told ARLnow.com from a conference room in Rosslyn’s UberOffices. “Then I was making games and useful apps, and when I published White Noise, it became the No. 1 free app on iTunes overnight.”

Considering the massive amounts of code and time it takes to launch some apps today, Moore’s app was relatively low-tech; he went around his house and yard in Arlington recording noises, like a fan, crickets and rain. He put the app on the store, and a month later he began charging $1.99 for it and created a separate, free app with advertisements. The switch enabled him to quit his job and devote his energy full-time to maintaining White Noise and building new apps. 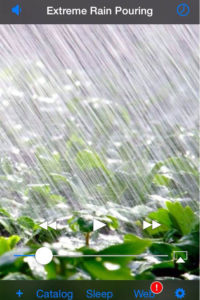 “It only took me a weekend to build the first [White Noise app],” he said. “It only looped eight different sounds. It was simpler times back then. Times have changed, now these phones are like personal computers.”

To date, White Noise has been downloaded more than 20 million times, allowing Moore to eventually grow his company to five full-time staff members. The ongoing success of the app has allowed him to experiment, and fail, with more ambitious apps. He said he’s launched more than 20, but only four have turned into high-volume downloads.

“It’s nice to be able to come into work and be able to say ‘this is what we’re going to do,'” he said. “If I have some wacky idea I want to try, we can try it. It’s total freedom.”

After White Noise became his meal ticket, Moore changed tack and started building more games and tools. He developed Card Counter, a game that teaches its users how to count cards at a blackjack table. Moore said he developed it after reading “Bringing Down The House,” a story about how MIT students learned to county cards and made millions of dollars at Las Vegas casinos.

Card Counter was in the top 20 of iTunes apps after casinos issued a warning about card counting apps. Puzzle app Compulsive is at around 2 million downloads. Moore is in production of another puzzle game that has social competition aspects and multiple levels.

“That’s something I’m spending a lot of time on,which is risky,” Moore said. “The longer it takes you to finish your app, the riskier it is.” 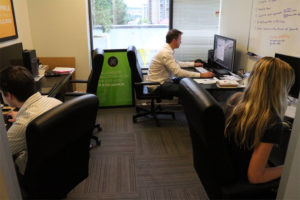 Moore entered the app world when it was just beginning, and he’s taken pride in nurturing young developers to grow in the industry. In 2009, he went to a college in Arizona and took on a handful of interns who had no idea what it took to build a mobile app. The program was such a success, he eventually hired two and has continued doing internship programs ever since.

“I had to start with junior developers, and I prefer that,” Moore said. “I can start with students eager to learn and can be great programmers.”

Moore has written a book titled “Tap, Move and Shake” about building games for mobile platforms. He said he’s looking to hire a few more people to bring on his team as the company grows, and emphasized that he doesn’t want to emulate the hard-driving, work-obsessed environments often found in the gaming industry.

“I’ve talked to people that have worked for other game companies, they sleep under their desks,” he said. “I talked to one guy who ended up in the hospital for stress. That is not the model I want to create here. I want to do everything I can to make sure this is a fun and challenging place to work, and not a place where people are going to end up in the hospital. There are more important thing than just making tons of money. Creating a fun, challenging environment to work in is more important, and I don’t ever want to lose sight of that.”