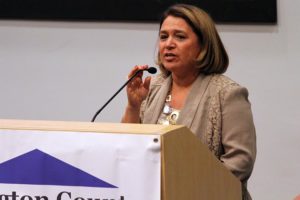 Those who don’t pay real estate taxes on time could face lighter penalties this year.

The Arlington County Board is considering a recommendation by Arlington County Treasurer Carla de la Pava to reduce the fee for a real estate bill paid up to 30 days late from 10 percent to 5 percent. Tax bills paid after 30 days would continue to incur a 10 percent penalty.

“The Treasurer … has concluded that as currently implemented a 10 percent penalty for late payment of real estate taxes is unnecessarily harsh for delinquent taxpayers who pay of their own accord,” the county’s staff report reads. “Specifically, it treats those taxpayers who simply forgot about a due date the same as those who refuse to meet their tax obligation without collection action by the Treasurer.”

The average real estate bill last year, which are paid in two installments a year, was $2,752.50, according to the treasurer’s office. If a resident paid on June 17, just two days after the June 15 deadline, he or she would have had to pay a $275.25 late fee. If the County Board approves de la Pava’s recommendation, that penalty would be cut in half, to $137.63.

The treasurer’s office said 1,346 Arlington taxpayers paid their real estate taxes between one and 30 days late in 2014. The 10 percent late fee meant they paid a combined $535,721 in fees alone.

“As the average Arlington County real estate tax bill increases, so does the financial hardship suffered by generally honest property owners by the late payment penalty system currently in effect,” the report says. “Furthermore, it is worth noting that the typical homeowner with a mortgage escrow account is extremely unlikely to ever incur a late payment penalty. Instead, the individuals more likely to miss a real estate tax due date are longtime and older residents who no longer have a mortgage on their home and thus are directly and personally responsible for making their real estate tax installment payments.”

If the late penalty had been reduced in FY 2011, the county would have taken in an average of $235,000 less each year, or just under $1 million. The reduced fee has already been included in the FY 2016 budget, according to county staff.

The motion is on the County Board’s consent agenda on Saturday, which means it is likely to approve it without discussion. If the Board passes the motion, Arlington would be the first jurisdiction in Northern Virginia to not charge the maximum late fee on a real estate tax, according to county staff.