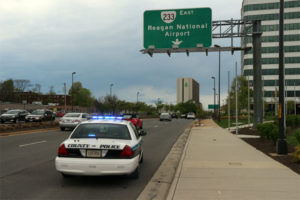 A pedestrian was sent to the hospital with a head injury after being hit by a car near the Arlington-Alexandria border this afternoon.

At about 3:30 p.m., a pedestrian at 33rd Street S. and Jefferson Davis Highway in the Potomac Yard area was struck by a sedan.

The pedestrian was conscious, but couldn’t remember where he was, according to scanner traffic. He was transported to George Washington Hospital’s trauma center with a reported head injury. The striking vehicle remained on scene.

The northbound lanes of Jefferson Davis Highway were blocked while the injured pedestrian was treated and the Arlington County Police Department investigated the incident, but the road has since reopened.