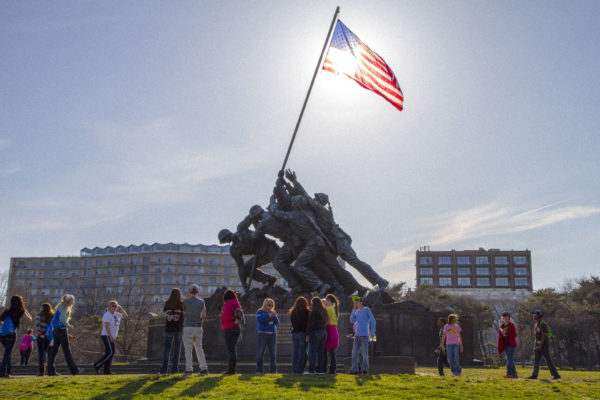 One of D.C.’s most prominent philanthropists has turned his eyes — and his wallet — to Rosslyn’s U.S Marine Corps War Memorial.

The Iwo Jima memorial is in line to receive a $5.37 million donation from David Rubenstein, who just last year gave $12.35 million to the Arlington House Robert E. Lee museum in Arlington National Cemetery. Rubenstein co-founded the private equity firm The Carlyle Group and has also used some of his billions of dollars to fund the Washington Monument’s post-earthquake repairs and enrich the Kennedy Center for the Performing Arts’ endowment.

Today, the National Parks Service announced that Rubenstein’s gift will go to “re-gild the engravings on the sculpture’s pedestal, wax the sculpture, and improve lighting, landscaping, and infrastructure.” The NPS will also improve the signage and educational materials on the memorial, sandwiched between the Netherlands Carillon, N. Meade Street, Route 50 and Route 110.

“It is a privilege to honor our fellow Americans who made the ultimate sacrifice to attain and preserve the freedoms we enjoy,” Rubenstein said in a press release. “I hope this gift enables visitors to the Iwo Jima Memorial to better appreciate the beauty and significance of this iconic sculpture, and inspires other Americans to support critical needs facing our national park system.”

The memorial was dedicated Nov. 10, 1954, by then-President Dwight D. Eisenhower. Since then, it has attracted millions in visitors. According to Arlington Economic Development, it attracted 1.4 million visitors in 2007.

“The Marine Corps War Memorial stands as a symbol of this grateful Nation’s esteem for the honored dead of the U.S. Marine Corps,” Marines Major General Michael R. Regner said in the release. “We are grateful for Mr. Rubenstein’s patriotism and generous donation to the National Park Foundation that will ensure this significant memorial continues to honor our fallen and inform public understanding of the cost and nature of their nation’s expeditionary force in readiness.”