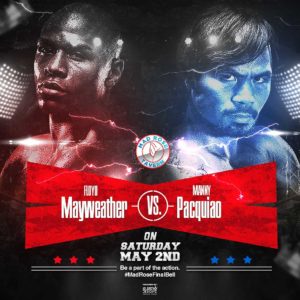 (Updated at 10:50 a.m.) One of the biggest sports days of the year is tomorrow, with two major events sure to fill up bars across the county: the Kentucky Derby and the “Fight of the Century.”

The 141st running of the Kentucky Derby will start around 6:30 p.m., and Circa at Clarendon (3010 Clarendon Blvd) is hosting Arlington’s watch party. Fancy hats are encouraged and mint juleps will be served for $7.

Welterweight champions Floyd Mayweather and Manny Pacquiao — long considered the two biggest names in boxing, but who have never fought before — will face off later that night (sometime around midnight, in all likelihood). The pay-per-view cost to view the fight is $99, which means bars in the area will ask viewers for cover charges to watch the most anticipated fight in years in their businesses.

Mad Rose Tavern (3100 Clarendon Blvd) is holding its own watch party, with women admitted free and men charged $20, with the price to escalate closer and closer to the opening bell. Just a few blocks away, Bracket Room (1210 N. Garfield Street) is charging a $30 cover to watch on their dozens of big-screen TVs.

As if the fight and the race weren’t enough, the Washington Capitals will face the New York Rangers for game two of their playoff series tomorrow. Numerous local bars are expected to show the 12:30 p.m. game.

Know anywhere else to watch the fight and the Kentucky Derby in Arlington tomorrow? Let us know in the comments.