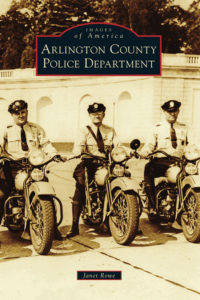 The Arlington County Police Department’s history is the subject of a new book, released yesterday.

Images of America “Arlington County Police Department” was released by Arcadia Publishing as part of its ongoing pictorial history series. The author is Janet Rowe, a former ACPD patrol officer who compiled photos from the 75-year history of the ACPD, many of which have never previously been published, according to a press release from Arcadia.

“This photographic history covers law enforcement from the early days of rumrunners to the present day, showing the changes in uniforms, equipment, methods of policing, and the department’s response to the 9/11 attack on the Pentagon,” the release states. “Officers are shown training for the line of duty, investigating crimes, serving in specialized units, and promoting public safety.”

The profits from the book will be donated to the ACPD Friends and Family Fund, which supports the family of officers in times of crisis. The book is available now online and in bookstores for $21.99.

Rowe served in the ACPD for 31 years, from 1981 to 2012, in evening patrol and as a member of the Crisis Negotiation Team. According to her bio, she is a recipient of two meritorious service awards, a life-saving award, the medal of valor and was named officer of the year by the ACPD.

“She hopes that this book will help highlight the police department through the decades and will bring another piece of history to the local community and reviving memories of those that have been part of the community through the years,” her bio reads.