Samantha Rios is a 13-year-old eighth-grader at Kenmore Middle School in Arlington, and her incredible voice has earned her onto the Spanish-language version of NBC’s “The Voice” reality show.

Samantha appeared on La Voz Kids in March and earned all three judges’ approval for her rendition of Whitney Houston’s “I Wanna Dance With Somebody.” Tomorrow, she is flying to Miami for the next round of performances, according to her chorus teacher, Raifel Faison. 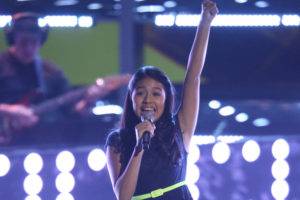 Faison has taught chorus at the school just off Route 50 near Arlington’s western border since 2003, and he said Rios is one of the most talents students he’s ever had. Since she came into his class as a sixth-grader, she has only improved.

“She’s always had the power, always had a powerful voice,” he told ARLnow.com this afternoon. “She’s never been shy or lacked confidence in her voice, but her tone has grown tremendously since sixth grade, her musicianship has grown. She’s learned so much about her voice, how to control it, and her vocal technique is definitely improving.”

Rios did tell the three judges that she was from Washington, D.C., in her blind audition, but her family calls Arlington home. Faison said Rios isn’t just a talented signer, she’s a well-rounded person.

“She’s a very sweet, loving, intelligent caring young lady,” he said. “She’s very supportive of her classmates, a hard worker. Whatever positive adjective you can think of would probably describe her.”

Rios is on Team “Daddy Yankee” the stage name of one of the trio of judges, one of 10 team members. According to her bio on La Voz Kids’ website, she’s already sung for the president multiple times and is a member of a D.C. gospel choir.

END_OF_DOCUMENT_TOKEN_TO_BE_REPLACED

More Stories
Healthy Paws: Seasonal and Environmental AllergiesMcAuliffe to Entrepreneurs: ‘I Want You to Stay Here’