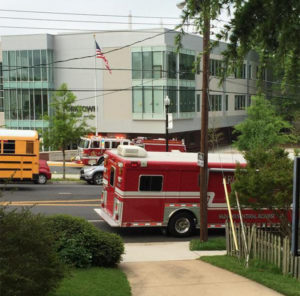 (Updated at 8:55 a.m.) The Arlington County hazmat team has responded to Yorktown High School for a reported spill of hydrochloric acid.

The spill has been contained to a classroom, according to Arlington County Fire Department spokesman Lt. Sarah Marchegiani.

So far no injuries have been reported.

Students are currently in the building, according to Arlington Public Schools spokesman Frank Bellavia. The facilities staff is trying to determine whether the school will need to be evacuated in order to flush the HVAC system, he said.