It has been nearly a month since ESPN reporter Britt McHenry’s tirade against an Advanced Towing employee went viral — and the company says business is booming.

John O’Neill, Advanced Towing’s owner, said he has received between 10 and 12 inquiries and new clients since the video leaked April 16, about double the company’s normal rate.

“New customer inquiries and acquisitions do increase when parking space poaching receives media notoriety,” he told ARLnow.com in an email. “Every new residential or commercial highrise being built in Arlington and surrounding areas engage towing services and there are a fair number of new projects being constructed. There are often more vehicles than available spaces in residential or multi-use settings causing parking to be an ongoing, popular topic.”

While Advanced Towing trucks may be getting busier, they won’t be towing cars away from the Hunan One Restaurant parking lot in Clarendon, at 3033 Wilson Blvd, where McHenry’s car was towed. 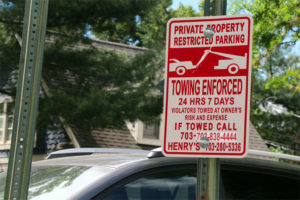 Hunan One General Manager Dale Jin told ARLnow.com yesterday that the restaurant’s building — a seven-story mixed-use structure with offices on top of ground floor retail — was recently sold to Carr Properties. When Carr Properties bought the building, it brought in Henry’s Wrecker Service to patrol the lot.

“We’re much happier now,” Jin said. “We complained for years about the towing company.”

O’Neill confirmed that Advanced no longer serves the lot, but said the change had “no connection whatsoever” with the McHenry incident