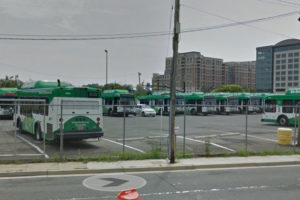 This Saturday, the Arlington County Board could take a large step toward solving one of its pressing issues: transportation facility space.

The County Board will vote on a $14.2 million contract to build a new facility to store and maintain Arlington Rapid Transit (ART) buses on S. Eads Street in Crystal City, right next to the current bus facility already there.

The site, at 3201 and 3175 S. Eads Street, would include a two-story building, a bus wash bay, a light maintenance bay, storage and parking and four compressed natural gas fueling stations.

“Services currently provided by ART are limited by a size-constrained storage facility that provides no capability for on-site fueling or light vehicle maintenance,” the staff report reads. “The construction of the ART Bus Facility will improve transit facilities, reduce costs, and increase utilization of mass transit services in the County, and assist with the integration of transit facilities into surrounding communities.”

In a separate County Board agenda item, county staff proposes to eliminate 32nd Street S. between Jefferson Davis Highway and S. Eads Street, which would allow two existing ART bus lots to be connected. The county has purchased, or already owns, the land on either side of the street, and transportation staff has determined “the Abandoned Street is no longer needed to provide public access from Jefferson Davis Highway to South Eads Street.”

The total cost of the new facility is estimated at $17.6 million, $5 million more than the county had budgeted in the 2015-2024 Capital Improvement Plan. County staff said that discrepancy was caused by a revised site concept with added capability for maintenance and fueling, roadway improvements to Route 1 and S. Eads Street and the increasing price of construction materials in the region.

The county plans on covering the funding gap using $1.3 million in state funding and $3.7 million through a rebalancing of ART budgets and dipping into contingency funds.

Once approved and built, the new facility is expected to save the county $57,000 a year thanks to ART buses no longer needing to use a nearby WMATA fueling and washing facility.