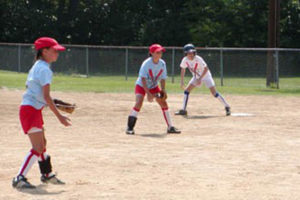 (Updated at 3:30 p.m.) The president of the Arlington Girls Softball Association says a lack of field space and a newly enforced school policy against signs has him very concerned for the future of the youth league.

The AGSA has been in operation for more than 30 years, President Steve Severn said, and currently serves about 500 girls, 92 percent of whom are Arlington residents. Those girls make up 38 local teams and six all-star and travel teams, who play games on just five fields in the county: Greenbrier Park next to Yorktown High School, Barcroft Park, Wakefield High School, Quincy Park and Arlington Traditional Elementary School.

This year, delayed construction at Wakefield has taken away that field, and Wakefield’s softball teams have taken the AGSA’s field at Barcroft Park. At the same time, the field at Arlington Traditional School is becoming increasingly problematic after Principal Holly Hawthorne banned sponsorship signs, a move the Arlington School Board supports.

“Having so few fields available creates havoc,” Severn told ARLnow.com today, after he sent an email to AGSA’s parents informing them of the issues the league faces. “High schools have the first choice to have fields, and that’s the way it should be… But there aren’t enough fields to go around. Youth sports are screaming for outside field space.”

Severn said the Wakefield field opened for one day this spring, but Arlington Public Schools closed it after it determined the fences were too short to protect the surrounding neighborhood. APS facilities staff said it will reopen in June, but high school teams historically have asked to be the first team to use a new field. Hence, Severn said, he doubts AGSA will be able to use that field until spring 2016.

While field space is a serious issue for every league, sport and age group in Arlington, the sign ban is one that could jeopardize AGSA’s future.

“If sponsors cannot see their banners or recognition for the money they contribute to our organization, they’re not going to contribute,” Severn said. “These are by and large community businesses. Their kids play on the team. That is going to hurt us. We depend on sponsorship money, we do not take in enough money from registration. I don’t know what the end result is going to be. Our sponsorship base is going to dry up eventually.” 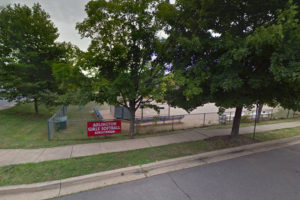 Severn said the league has been hanging banners recognizing sponsors for decades. This year, they tried to hang small, individual signs for each sponsor, which Severn said Hawthorne put a stop to. He asked the School Board to step in, and they did — to affirm Hawthorne’s decision.

“Ms. Hawthorne contacted APS senior staff to review APS policies on the display of sponsor banners, and we agreed that display of such banners on school property is not permissible,” School Board Chair James Lander said in an email to Severn. “The School Board wishes the AGSA success with the remainder of their season and we appreciate the patience the teams have shown.”

Hawthorne did not respond to an interview request this morning. When asked for comment, APS forwarded to ARLnow.com Lander’s message to Severn.

Severn said he’s met with APS Assistant Superintendent of Facilities and Operation John Chadwick, which “opened up a line of communication, but didn’t resolve anything.” The School Board’s ruling could mean no more banners at Wakefield when the new field opens, either. Severn told parents that an anticipated decline in sponsorship revenue could mean a significant increase in league fees.

“I’m not trying to fan any flames here, but I’m upset because the decisions are made in a vacuum,” he said. “When we got the note back from James Lander, it’s the end of the story. There is no other avenue for us. We have no real recourse there. That’s just the disturbing part.”