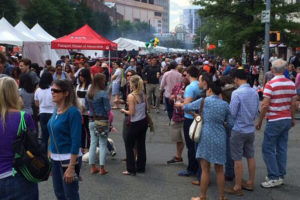 The annual street festival in Ballston, celebrating the restaurants of Arlington, is back on Sunday from noon to 6:00 p.m.

This year, Taste of Arlington will feature 49 restaurants and a beer and wine garden that’s bigger than ever. Booklets of tickets for tasting and drinking are on sale now.

Stop by the Ballston farmer’s market tomorrow evening, from 3:00 to 7:00 p.m. at 901 N. Taylor Street, for a $25 packet of 10 tickets. If you purchase on the Ballston Connect mobile, app, a packet costs $30. Packets purchase online are $35 and packets purchased at the festival will be $40. Tickets to the VIP pavilion, with unlimited beer, wine and hors d’oeuvres provided by SER, cost $100 online, and $110 at the festival.

The festival will close down the streets of Ballston all day: Wilson Blvd from N. Glebe Road to Quincy Street and Stuart and Randolph streets from Wilson to 9th Street N.

In addition to the restaurant booths, beer and wine garden and VIP pavilion, there will be three stages for live music, a Kids Zone with games and face painting and the return of the World Pup Tournament, which costs $10 to enter one’s dog to participate.

The restaurants in attendance will compete for a “Best of the Best” food title in the following categories: Best Appetizer, Best Fast Casual Entrée, Best Fine Dining Entrée and Best Dessert. The judging will be held at 3:00 p.m. in the VIP pavilion and the winners will be announced at 4:00 p.m. on the main stage.

Proceeds from the event will benefit the Arlington Food Assistance Center. The restaurants participating and competing are as follows: