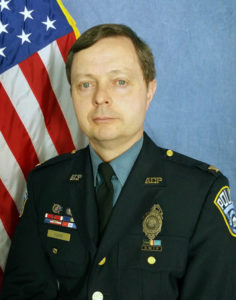 Arlington County Manager Barbara Donnellan announced today that acting chief Jay Farr will ascend to the permanent job after serving in Scott’s stead since March. Farr has previously served as deputy county manager and deputy chief of police for systems management, operations and criminal Investigations, and has served in the ACPD since 1990.

“Jay has demonstrated a commitment to excellence during his more than two decades in Arlington,” Donnellan said in a press release. “He brings strong leadership skills, an outstanding professional background, and a true passion for connecting communities with law enforcement. He is the right man to lead the department into the future.”

Donnellan said she conducted a nationwide search, but determined the right person for the job already had it. Farr is a former U.S. Marine who served on the presidential helicopter detail before becoming a police officer.

“I am honored at the opportunity to lead this great department and will maintain an unwavering commitment to community policing,” Farr said in the release. “I strive to instill a sense of teamwork with our communities, officers and regional law enforcement partners.”

In addition to leading the county’s police, he’s also teaching future officers: he’s an adjunct professor of criminal justice at George Mason University and teaches for the University of Phoenix.