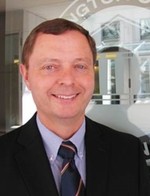 Arlington Deputy Police Chief Jay Farr will serve as Acting Police Chief starting next month, following the retirement of Chief Doug Scott, according to a memo obtained by ARLnow.com.

Scott announced last month that he would retire effective March 20, after serving as Arlington’s police chief for 12 years. In a memo to police department employees sent Friday, County Manager Barbara Donnellan said Farr will fill in as chief while the county looks for a permanent replacement.

“I know many of you may also be wondering about leadership in the interim, and I am pleased to announce that I am appointing Deputy Police Chief Jay Farr as Acting Police Chief effective March 20, 2015 while we conduct our search,” Donnellan write. “Please continue to support him as you have Chief Scott. This time of transition is an opportunity for us to pull together and continue to work for the good of the community.”

“Thank you for your dedicated work in keeping our citizens safe; you provide a vital service for Arlington County,” Donnellan continued. “I will continue to keep you updated on the police chief recruitment as we continue this process together.”

Farr has served on the Arlington County police force since 1990, according to his LinkedIn page. Prior to working in Arlington, Farr was an NCIS special agent, a Falls Church police officer and a member of the Marine Corps’ presidential helicopter squadron. He is an adjunct faculty member at George Mason University’s Dept. of Criminology, Law and Society.

Farr spent several months away from the police department between 2013 and 2014, serving as an interim deputy county manager after Deputy County Manager Marsha Allgeier stepped down.

In the memo, Donnellan noted that the county will be “launching a nationwide recruitment for a new police chief in the next few days, and will be looking at both internal and external candidates.”