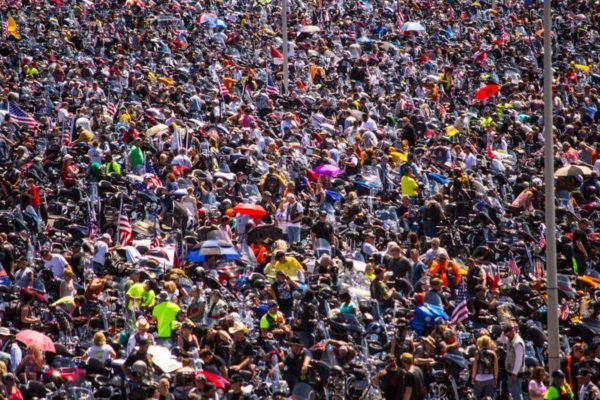 The Memorial Day weekend event will begin with the expected arrival of thousands of motorcyclists this afternoon, many of whom will be arriving via I-66. Authorities are warning drivers to expect delays on eastbound I-66 between 2:00 and 4:00 p.m.

The Hyatt Regency in Crystal City will serve as the hotel headquarters for the event, which according to organizers attracts some 900,000 bikers to the nation’s capital. The expected arrival time at the hotel is 3:00 p.m., according to a weekend schedule.

Arlington residents who live along the Route 1 corridor should, as usual, expect plenty of motorcycle noise throughout the weekend.

Aside from activity around the hotel, no Rolling Thunder events are planned in Arlington on Saturday. On Sunday, starting at 7:00 a.m., participants will gather at the Pentagon north and south parking lots for a large rally, which this year will include food trucks.

From the Pentagon, the bikers will depart for a rally on the National Mall, featuring various speakers and musical tributes, at noon.

To accommodate the large expected crowds, Arlington County and Virginia State Police will close Washington Blvd between I-395 and the Memorial Bridge from about 7:00 a.m. to 4:00 p.m. on Sunday.

“In addition, Arlington National Cemetery will only be accessible from southbound George Washington Memorial Parkway or northbound Route 110,” ACPD said in a press release. “Motorists should expect large numbers of motorcyclists in Northern Virginia and the entire Washington Metropolitan area this weekend.”