Progressive Voice is a weekly opinion column. The views and opinions expressed in this column are those of the individual author and do not necessarily reflect the views of the author’s organization or of ARLnow.com.

Every May, millions of Americans take to the streets, trails and paths on two wheels to enjoy the feeling of the wind in their hair, the sun on their helmets and the pedals under their feet in celebration of bike month.

This May has been a wonderful time to bike here in Arlington. In addition to the mostly beautiful weather, we have had some very successful events, which show the growing popularity of cycling in Arlington.

Bike and Walk to School Day, which was on Wednesday, May 6th this year, was a record-setting success for Arlington Public Schools. Arlington was fourth among U.S. cities with registered events at 33 schools, including diverse participation from neighborhood and county-wide schools. Students arriving on bike or foot were treated to VIP entrances and rallies, a special obstacle course for cyclists, and lots of goodies. 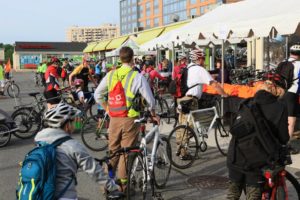 Many APS staff biked to work, including at least one principal, and were rewarded with gift cards. A huge thanks to Tom Norton, the APS Safe Routes to School Coordinator, and to all APS and Arlington County staff and partners who had a role in this great day. Pictures can be found online using the hashtag #BWTSD15.

For adults (and kids who were towed along), Bike to Work Day was Friday, May 15th. It was also hugely successful. Arlington hosted six pit stops, including a new stop along Columbia Pike in Penrose, where cyclists could stop on their way to work and be treated to coffee, treats, swag, and lots of excited cheering from superheroes, unicyclists and elected officials.

In all 2,596 people registered for the Arlington pit stops and almost 17,500 registered for pit stops across the region. Both were a 4% increase over 2014. Over 1,000 of Arlington registrants were first timers! BikeArlington, WABA and their partners deserve thanks for hosting this great day. Pictures can be found online on the BikeArlington website and using the hashtag #BTWDDC.

With so many new riders, the growth in Bike to Work Day was no surprise. More impressive is the general growth of cycling in Arlington and the region. Anecdotally, we’ve all noticed more cyclists on the roads and on the trails, and that we’re seeing a more diverse group of people on bikes.

Bike racks at local schools and offices are filling up on “normal” weekdays. My family’s preschool has multiple families biking with their toddlers. Bike parking along the Rosslyn-Ballston corridor fills up at night and on the weekends. It’s great to see more women, more people of color, and more families cycling on streets and trails.

Data backs up our experience. Many of Arlington’s automated counters of bicycle and pedestrian trips along some trails and bike lanes have shown significant increases in bike traffic. Some – like the counter on the Mount Vernon Trail south of DCA – have shown a greater than 20% increase from May 2014 to May 2015. Clearly, Arlingtonians are hopping on bikes more often.

County leaders have responded positively to this increase in bike traffic. Even in a challenging budget year, the County Board voted unanimously to maintain funding for bike and pedestrian safety programs.

Looking forward, the County should respond to the growth in bike traffic by planning to build a bicycling network that reflects the increased popularity of cycling and should increase resources dedicated to keeping vulnerable road users safe.

As a start, the County should fund the update to the Bicycle Element of the Master Transportation Plan, as called for by the Transportation Commission and the Bicycle Advisory Committee. In light of new restricted access through Fort Myer, which forces cyclists into a dangerous situation on Columbia Pike, the County should speed up construction of the Hoffman-Boston Connector through Army Navy Country Club in the next Capital Improvement Plan and should shift the construction schedule for Columbia Pike to make sure there is a safe route from Orme to Courthouse Road.

Gillian Burgess is the current Chair of Arlington County’s Bicycle Advisory Committee, the founder of Kidical Mass Arlington, and the former Vice Chair of APS’s Multimodal Transportation and Student Safety Special Committee. She lives in Cherrydale with her husband and three toddlers.