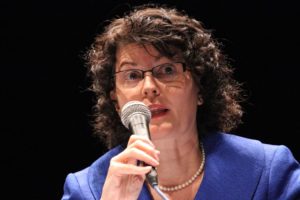 The bills deal with reporting of sexual assault occurrences on public college campuses. State Sen. Barbara Favola, who represents part of Arlington in Virginia’s 31st District, helped write the legislation, including a bill that required campus safety officials to be part of a threat assessment team formed after a student reports sexual assault. The establishment of a threat assessment team is required by Title IX.

Under Title IX, a federal law that deals with preventing discrimination based on gender, certain college administrators must report sexual assault to law enforcement. It is also part of the Clery Act, which requires schools publicly report crimes on campuses. The new laws will make it a state requirement as well.

Under the Favola’s amendment to the bill, a threat assessment team, which will include campus safety officials, has to investigate a sexual assault claim without releasing the name of the survivor. If the team determines that there is a legitimate threat to the survivor, it will then release the name to local law enforcement or a local state attorney if necessary.

The bill was originally authored by Sen. Richard Black, who represents Viriginia’s 13th District. The original bill, sparked by the Rolling Stone article about University Virginia, had campus officials report a sexual assault to law enforcement immediately after a report was filed, Favola said.

When campus administrators heard about the bill, they came to Favola for help. The officials told her they thought the bill would discourage people from reporting sexual assaults to the school because it would go to the police, she said.

Many sexual survivors have to process the trauma of a sexual assault, and some survivors do not want to report to police, Favola said.

The signed bill now allows survivors to have time to accept the traumatic event as well as get some counseling, Favola said. A second bill, also signed by McAuliffe, includes a memorandum of understanding, which helps survivors get counseling.

“I think we ended up in the absolute right place,” Favola said.

Favola is not sure if reported cases of sexual assault will go up with the new laws in place. Some believe there will be more cases reported because the state government is trying to make the bill very public in order to ensure that students and colleges know about the new process.

Arlington’s Marymount University will be among the colleges subject to the new laws. Marymount reported two cases of forcible sex offenses on campus for 2013, in its 2014 Campus Safety report.

Favola says she’s not done with sexual assault legislation. She is now turning to prevention at colleges.

“As a parent, as a woman, as someone who’s been a part-time employee of a university for 19 years, our children need to be safe,” Favola said.

END_OF_DOCUMENT_TOKEN_TO_BE_REPLACED

More Stories
Open Houses in Arlington This WeekendWWBG: Summertime in the Biergarten