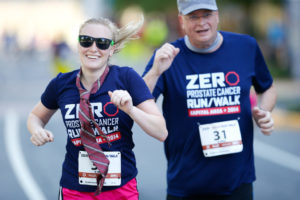 Hundreds of runners will celebrate Father’s Day in Pentagon City with a race to help end prostate cancer.

The annual Zero Prostate Cancer Run/Walk, hosted by Zero- The End of Prostate Cancer on Sunday, is a series of four events, with a four-mile run/walk, kids race, a one mile fun run and a “virtual” option for those who don’t want to wake up early.

“This series is a great chance for men, women, children, and families of all ages to increase awareness and raise funds to end a disease that affects one in seven fathers, husbands, brothers, sons, grandfathers, partners and friends,” said Jamie Bearse, the CEO of Zero in a statement.

The event starts with the Superhero Dash, a short sprint for kids ages nine and younger, at 8:15 a.m. Kids can dress up as their favorite superheroes and will receive capes.

The four mile walk/run starts at 8:30 a.m. and will take runners from Pentagon Row courtyard (1101 S. Joyce St.) down Army Navy Drive to S. Adams Street. Runners will turn around at S. Adams Street and finish at Pentagon Row. Participants can select and put on a tie shortly after the one mile mark at the “Tie One of for Dad” transition area (at S. Nash Street).

This year, people can help support the end of prostate cancer from their beds by wearing a “Snooze for Dudes” t-shirt and posting a picture to social media.

Participants can register as an individual or as team. Registration is $40 for the four-mile race, $20 for the one-mile walk, $20 for the Superhero Dash and $35 for Snooze for Dudes.

The race will also feature the “Courage Wall,” a chalkboard wall where people can write what they wish they had the courage to be or do. The wall was created by Del Ray local Nancy Belmont and has since gone viral.

“The run/walk aims to bring together survivors, patients, families, friends and many in the community to raise funds for prostate cancer, and share hope and passion, and the Courage Wall will help us to do that,” said Amanda Pini, the marketing and communications coordinator for the race.