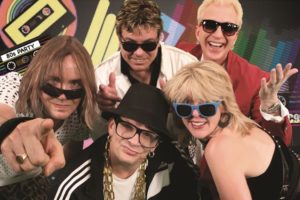 Two summer concert series in Arlington will feature cover bands paying homage to the best music the 80s and 90s had to offer, big hair, goofy sunglasses and all.

Pentagon Row has announced the line up for “Rock at the Row,” and Rosslyn’s “Throwback Thursdays” has five performances remaining.

“Rock at the Row” is in its 13th year, with concerts starting next month. The performances will take place Thursday evenings from July 16 to August 20 in Pentagon Row’s plaza area. In addition to the music, there will be craft beers and food samples in a VIP section.

The schedule, below, includes several locally-known cover and tribute bands, as well as a special Saturday evening concert by the 257th Army Band:

All performances start at 7 p.m. and are free and open to the public.

If “Rock at the Row” isn’t enough of a music fix, residents can head to Freedom Park (1101 Wilson Blvd.) and check out Rosslyn’s “Throwback Thursdays”.

The series features cover bands “embracing the best of the 80s and 90s,” according to the event page.

Performances were scheduled to start the first Thursday of this month (June 4), but that evening’s concert by The Reflex was rained out and has not yet been rescheduled.

The series kicked off June 11 with a performance by Flannel Junkies. It was to be followed last Thursday (June 18) by Toxic Mouse, but that concert was cancelled due to bad weather.

The five remaining performances, below, are scheduled to take place this tomorrow evening (June 25) and every Thursday evening in September:

Concerts start at 6 p.m. and are free and open to the public. Washington Wine Academy plans to offer $5 beer and wine to those of age at all remaining performances.