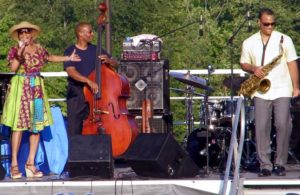 The Rosslyn Business Improvement District has announced the lineup for its annual jazz festival.

The event, which BID president Mary-Claire Burick says will be “exciting, bold and fun,” is celebrating its 25th anniversary this summer. In addition to performances covering everything from classic soul to international funk, the festival will feature a selection of food and fashion trucks and an expanded beer and wine garden.

The BID has organized a lineup of  both locally and nationally known artists. Several headliners have already gained national acclaim, including Debo Band, whose EP “Debo Band” (2011) appeared on NPR Music’s 50 Favorite Albums of 2012, and New Orleans group The Dirty Dozen Brass Band, whose music has been featured on the HBO series Treme.

The festival will run from 1-7 p.m. on Saturday, Sept. 12 in Gateway Park (1300 Lee Hwy, near the Key Bridge). All performances are free and open to the public, and the full concert lineup is below.