When you head out for vacation this summer, be sure to read up on beers that are from the area where you will be visiting. That’s what I did when my family took a road trip down to Savannah.

There are quite a few craft breweries between Virginia and Georgia. Some distribute up here and others only serve their beer from the pub next door. Seek out the local gems while you’re abroad — you might discover a beer to remember. Then find the wider distributed brews when you return home to reminisce.

I’m going to recreate my road trip by sharing beers from the states I drove through that are available here. Unfortunately, I was not able to get a South Carolina beer for this article, but I’d love to hear what your favorite South Carolina brew is. 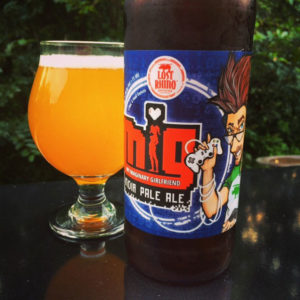 The first beer actually fits into the category of local gem. Located east of Dulles Town Center in Ashburn, Lost Rhino Brewing Company is the torch carried by former Old Dominion brewers who stayed in Virginia when Old Dominion moved to Delaware. I hold the beers of that Virginia incarnation of Old Dominion in a special place in my beer memory — their Tupper’s Hop Pocket was my introduction to a hop bomb.

Well, MIG is every bit as good as I remember all Old Dominion’s beers to be — usually on the hoppy side. The aroma is a pleasing bitter citrus with a hint of pine, a thrilling sign post to the hop adventure ahead. MIG’s flavor explodes as tropical fruit and grapefruit at first, but finishes complexly with a hint light maltiness and pine. Cool off in the shade with a glass of this and a light salad. 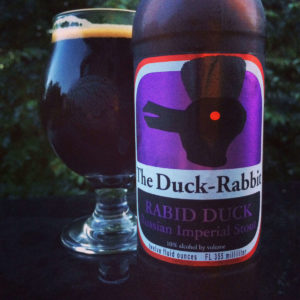 Head south on interstate 95 just past Rocky Mount, NC and take exit 38 for interstate 795 and head into Farmville. There you will find The Duck-Rabbit Brewing Company — the self-proclaimed “dark beer specialist.” It’s hard to argue with that moniker — they only brew dark beers (really!) and it pays. They were famous for their milk stout before milk stouts were in fashion (they really were).

Rabid Duck is a special imperial stout. While it’s a heavy hitter at 10% ABV, it is also super drinkable. Dark brown sugar is all over the aroma. The flavor, though, is where the real pay off is — the black malt provides a fantastic bitterness that offsets the sweetness of the alcohol. While most imperial stouts are better suited to after dinner enjoyment, this one is light enough to accompany a grilled steak. 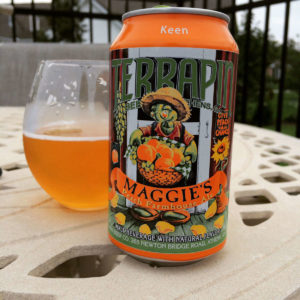 Once in Savannah, you can find plenty of local gems like I mentioned above, such as Moon River Brewing Company and Service Brewing Company. The former’s firkin of cask-conditioned Swamp Fox IPA was a beer to remember (and dream about). Unfortunately, those breweries are not available here at home.

Northeast of Savannah is the college town of Athens, home to Terrapin Beer Company. Known in recent years as one of the craft breweries that sold a stake to “big beer” — MillerCoors bought in in 2009 — Terrapin has nevertheless retained it’s craft identity by continuing to produce well-made, interesting beers. Maggie’s Peach Farmhouse Ale is a great example of their commitment to the craft. Mixing the state fruit of Georgia with a farmhouse ale is ingenious. The tropical fruit inherent in the Belgian beer style blends perfectly well with the peach. Unlike traditional farmhouse ales, which can be a bit spicy, this one is fruity and refreshing. It’s effervescent and only lightly malty — perfect for a hot, sunny day in one of Savannah’s many historic squares. Don’t forget to pour your Maggie’s into a plastic cup, open containers are allowed in Savannah as long as they’re plastic!

That was quite a trip! I hope you are able to bring back some beer from wherever you go this summer. If you can’t bring it home, be sure to enjoy it while you’re there. Then come home and relive some of your favorite moments with breweries you can get up here. Cheers!