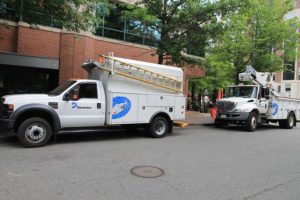 A power outage in the Rock Spring area of North Arlington has knocked out power to homes and traffic lights.

The outage is affecting homes around Jamestown Elementary and at least one traffic signal on Glebe Road, according to police scanner traffic.

More than 400 Dominion customers are without electricity in the area, according to Dominion’s power outage map. Across the border in McLean, another 1,300 homes are affected by the outage.

Dominion’s initial estimate is that power will be restored between 9-11 p.m.

This is at least the second time the neighborhood has lost power this week, according to one resident.

@ARLnowDOTcom For second time in 24 hours Jamestown neighborhood has no electricity. What is wring with @DomVAPower ?