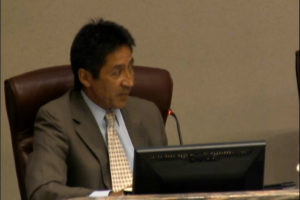 The County Board has given the green light to hiring a new independent auditor, but not before some internal bickering.

The Board approved the recruitment of the auditor with a vote of 4-1 during its recessed meeting Tuesday.

The new independent auditor will work with a new Board-appointed audit committee to review county programs for effectiveness and efficiency, according to the County Board’s charge.

The push for the auditor was led by Board members John Vihstadt and Libby Garvey, with support from Jay Fisette, who is a former auditor himself.

“I don’t think anyone in the community should be afraid of an auditor,” Fisette said. “I’m not a scary guy and auditors typically aren’t if you set it up properly.”

Board Vice Chair Walter Tejada fought against the charge, saying that the push for an auditor indicates a distrust in government. Tejada specifically called out Vihstadt before he was cut off by Board Chair Mary Hynes.

“Madame Chair, I think that I don’t drink the Kool Aid that has been put out there in the community to create, to allege a culture of distrust of government, which is well know as we know by the Republican party to question and to allege mismanagement,” Tejada said.

“So I submit to you, from my perspective, I respectfully think this is a proposal for an expansion of the bureaucracy, it is redundant, it is not needed, it is again to foster a distrust of government and part of the new era in Arlington,” Tejada said. “A timid and stagnant era of distrust.”

Tejada questioned the need for an auditor when the county has received triple triple A bond ratings for the past 14 years.

“I guess I start first with what problem are we trying to solve?” he said.

The County has designated $200,000 for the creation of the new position in its 2016 budget. The new auditor will report directly to the County Board. An existing auditing function within the Dept. of Management and Finance reports to the County Manager.

“The fact is this county auditor is intended to strengthen and buttress confidence in county government, not undermine it,” Vihstadt said.