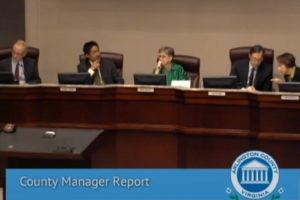 The County Board is about to begin the process of hiring a new independent county auditor.

The Board is expected to charge Acting County Manager Mark Schwartz with the creation of an independent county auditor position during its recessed meeting next Tuesday.

Once the Board approves guidance to the manager, Schwartz and officials from the Department of Management and Finance will begin recruiting and screening candidates, with the final hiring t0 be done by the County Board.

The auditor will report to the Board rather than the manager, who is county government’s top executive and oversees the county workforce.

The new auditor will work a new Board-appointed audit committee to review the county’s programs for efficiency and effectiveness, as well as any policy concerns, according to the County Board’s charge. The committee will consist of two members from the County Board, the county manager or deputy county manager, the director of the Department of Management and Finance and up to three members from the Fiscal Affairs Advisory Commission or members of the public.

The new audit committee and auditor will be separate from the existing internal audit function inside of the Department of Management and Finance, which reports to the county manager.

“The County Board intends that the County Auditor and the Internal Audit group will collaborate and cooperate in furthering their respective missions, including meeting and exchanging information and materials as appropriate,” the charge says.

The County has designated $200,000 for the creation of the new position in its 2016 budget. After that, it’s hoped that it will begin paying for itself by finding cost savings and efficiencies in county government.

The Virginia House of Delegates approved a bill allowing for the creation of a county auditor position in Arlington last February. County Board member John Vihstadt has pushed for an independent auditor while on the Board and the campaign trail.

END_OF_DOCUMENT_TOKEN_TO_BE_REPLACED

More Stories
County Board to Decide on $215,810 in Art GrantsArlington Pet of the Week: Sam-I-Am