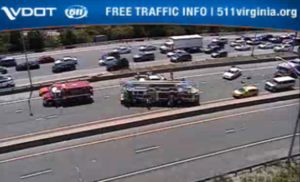 One northbound HOV lane of I-395 just before the 14th Street Bridge is blocked due to a crash.

The crash appears to involve 2-3 vehicles, including a D.C. taxicab. Initial reports suggest the driver of one car is hurt and may have needed assistance to get out of the vehicle.

Drivers should expect delays in both the HOV lanes and the northbound mainline.