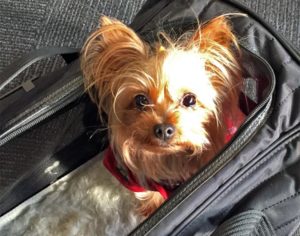 (Updated at 1:25 p.m.) A tow truck accidentally ran over and killed a small dog in Clarendon on Friday, as the truck was in the process of towing a dog walker’s car.

Mayra Perez said she got the news that her 9-year-old Yorkshire Terrier, Charlotte, had been killed while she was in Chicago making preparations for her wedding next month. She took the next flight home.

“Instead of picking out her flower girl dress I’m picking out an urn for her,” Perez said in a phone interview, her voice trembling. “This is the worst possible thing that could happen… we are beyond heartbroken.”

The incident happened around 5:00 p.m. on Friday, on the 1200 block of N. Herndon Street in Clarendon.

According to police, a dog walker who has numerous clients in The Clarendon Apartments had parked illegally in front of the building. Building management called Advanced Towing to tow the car, not realizing that it belonged to a popular dog walker who often parked there while walking dogs in the building.

“As the tow truck was towing the vehicle away, the dog walker approached the driver while walking three dogs,” according to Arlington County Police spokesman Lt. Kip Malcolm. “A conversation or argument occurs and the dog walker asks the driver to pull around so that he can discuss it with management. As the tow truck driver is pulling away, one of the dogs was struck by the back, driver’s side tire and subsequently died.”

John O’Neill, owner of Advanced Towing, said the dog walker was walking away when the tow truck began to move. Unknown to the driver, the dog was on an extended leash and ran under the wheel as the driver began to move, O’Neill said.

“The tow driver is a dog owner and was devastated when he realized the dog had been struck,” O’Neill said. The driver was distraught and was given the rest of the day off, he said.

Perez, however, said that she heard a different version of events from the dog walker and a witness. She blames Advanced Towing for her dog’s death.

“You see this tow company in our neighborhood constantly flying down the street,” she said of Advanced. “It’s lie after lie. I just don’t find it fair. We lost our family member.”

Police investigated the incident but no one was charged. Perez said she and her fiancee, Aakash Desia, are planning on speaking to an attorney.

“It’s been tough… it’s a life changing event,” said Desia. “This is the worst kind of negligence.”

Desia questioned why tow trucks don’t have camera on the sides in order to avoid accidents like this. Perez, meanwhile, is mourning Charlotte and lamenting that she didn’t bring her to Chicago with her, as she usually does. Matilda, Charlotte’s younger Yorkie sister, is also mourning her death.

“Charlotte was loved and spoiled beyond measure,” Perez said. “She will be greatly missed by the both of us and her sister.”

The brief pursuit of a carjacking suspect in Arlington ended the way many police pursuits do: on a bridge over the Potomac.

More Stories
Art-Themed Restaurant for the ‘Millennial Crowd’ to Open in Shirlington in DecemberVDOT to Hold Open Meeting for Future I-395, Glebe Road Repairs