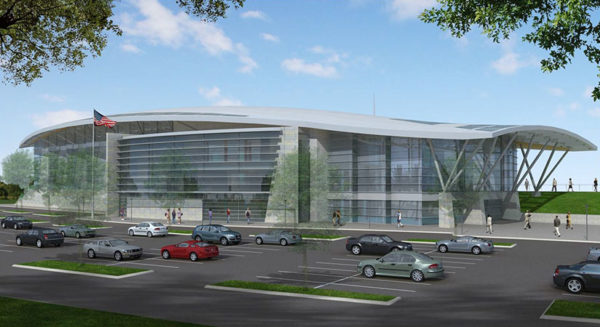 Arlington County is asking for public input on a possible partnership with Alexandria to build the proposed Aquatics, Health and Fitness Facility in Long Bridge Park, near Crystal City.

The county will reach out to residents this fall to see what they would like to see in an aquatic and fitness facility. Alexandria will also be surveying its residents.

If interests in both counties line up, the two will start to discuss costs and responsibility for the development of the pools and fitness area. The border between Alexandria and Arlington is roughly three miles from Long Bridge Park.

The possible partnership is the county’s latest plan to find the funds it needs to complete the second phase of the Long Bridge Park Project Plan.

“If the synergy is there, and both communities are interested, we will explore this further,” County Board Chair Mary Hynes said in a statement. “Partnerships are just one of the many creative ways we are approaching the development of our facilities and programs.”

Phase Two includes building the aquatic and fitness facility, connecting an esplanade in Long Bridge Park to the building and the creation of public areas, trails, public art, walkways and signs for the park, according to the 2013 Long Bridge Park Master Plan.

The county has been planning a redesign of Long Bridge Park for more than 10 years, with the first phase completed in 2011. Higher-than-expected construction bids and operating costs prevented the county from choosing a contractor to complete phase two, pausing the project in 2014.

Once completed, the aquatic and fitness facility is planned to have a 50-meter pool for recreational, fitness and competitive swimming. There will also be a smaller pool for exercise and recreational program, a small hot-water therapy pool and a free-form water play area that will include a lazy river and slides, according to a 2013 design plan for the facility.

In addition to the aquatic elements, the facility will have a large fitness area and a community room, according to the plan. A “Multiple Activity Center,” which will have a climbing wall, a large indoor fitness space and an elevated track, is also planned.

The plans may change based on feedback from residents, Hynes said. The County Manager is scheduled to present recommendations to the County Board in January 2016.

“A lot has changed since that building was designed,” Hynes said. “The economy has changed. Many things in the region are different.”

While the county is waiting on the aquatic and fitness facility, it will continue to make improvements to the park. In June, the County Board unanimously approved the construction of playgrounds on the south end of the park. The $1.082 million contract includes play areas with cooling “fog” systems, tunnels, play structures, bridges, benches and fencing.