With operating costs projected at twice the original estimates, and construction bids “significantly higher” than anticipated, it may be a case of downsize or die for the proposed Long Bridge Park Aquatics, Health and Fitness Facility.

The project, which was at one point supposed to be under construction by now, is on hold as a result of contractor bids well exceeding the $79.3 million budgeted for the first phase of construction. The county has yet to reveal exactly how high the bids were.

Last night, meanwhile, Arlington County officially acknowledged that a 2012 estimate of the facility’s operating deficit — $1.9 million in Fiscal Year 2020 — has doubled to an annual deficit of $3.8 million. That excludes the cost of running the existing facilities at Long Bridge Park.

After pausing the project, Arlington County Manager Barbara Donnellan instructed her staff to analyze the rising costs of the facility and recommend a course of action. That course of action may be to downsize the county’s lofty ambitions for the “world-class” facility, push it back until economic conditions improve, or scrap it altogether. 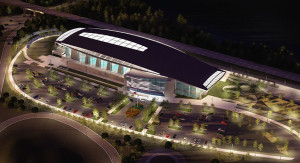 “We’re in the process of trying to figure out what the costs will be should the Board decide to move forward on the project at this time,” she said. Speaking to ARLnow.com, Hynes said she would not support spending additional money on the facility at a time when capital funding is urgently needed to increase school capacity.

“We have a certain amount of money set aside for this, we don’t have more than that,” she said. “We have been building pretty significantly for the last 20 years, we’ve spent hundreds and hundreds of millions of dollars in schools. We’ve done fire stations, we’ve done other things. We have a 10 percent self-imposed debt limit and we’ve been bumping around in the 9’s.”

“The only way you get more debt capacity is to raise taxes,” she continued. “I guess that’s a choice that some people would make, that’s not a choice I’d make for a swimming pool.”

Scrapping the facility altogether could prove difficult. Voters have already approved a $42.5 million parks bond for the facility and Vornado has committed $15 million as part of the PenPlace development. 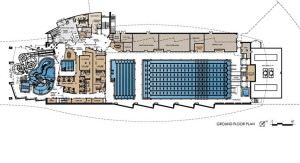 Jay Fisette, a stalwart supporter of the Aquatics, Health and Fitness Facility, says nearly a decade was spent on the center’s design in order to address a community need. Noting that the design of the facility was “incredibly energy efficient,” perhaps driving up costs, Fisette said he’s hoping that those bidding on the project will be swayed to lower their bids and “value engineer” some savings.

“It’s certainly my hope that there’s some ability to look at the bids and talk to the bidders… and narrow that gap,” he said. “The park and the facility design itself came out of a community needs assessment. It was supported by 64 percent of the voters just 14 months ago. I hope we can responsibly move forward.”

Blaming earlier reports that the projected operating costs had increased up to 350 percent on “a complete error” by county staff, Fisette said there are numerous misconceptions about the costs. He added that earlier “exaggerations” about the exact extent of the cost increases have been “celebrated by longtime opponents of the facility.”

Two out of three Democratic candidates for Chris Zimmerman’s soon-to-be-vacant seat on the County Board say they generally support the aquatics center moving forward. Democrat Cord Thomas, independent John Vihstadt and libertarian Evan Bernick all are on record opposing the facility as proposed.

Thomas said he would perhaps support a scaled-down aquatics center.

“We have great ambitions, but we just have to follow through,” he said. “We once again botched a simple pool project. We tried to explode it and make into something more than it needed to be. If we can scale it back and find something affordable, swimming is great, but until then I’m not going to support moving forward.”

Meanwhile, Democratic candidate Alan Howze, who chaired the 2012 Arlington Bond Campaign that helped provide substantial funding the facility, told ARLnow.com that there “clearly is a need in the community” for an aquatics center as the population of families with children in Arlington grows.

“We should move forward with [the project] if we can do it within the budget we’ve allocated for it,” he said.

Democratic candidate Peter Fallon, who spent 6-7 years on the Long Bridge Park Master Plan and Design Advisory task forces, said there’s a fundamental need for the facility. However, he said it was planned “in a different economic environment” and that the task force was given overly optimistic cost estimates by the county staff.

“I support building an aquatics center at Long Bridge Park, but I think we need to step back and perhaps do it a little differently,” he said. “We have a lot of competing priorities. We need to be clear on whether it’s the right thing to do now and on what we would not be able to [afford] because we did it.”

Beyond the “Phase 2” of Long Bridge Park, which includes the aquatics component and some fitness components of the facility at the estimated $79.3 million price tag, a final phase — “Phase 4” — would build a 100,000 square foot indoor athletic and fitness center with a 547-space underground parking garage.

Part of the overall Master Plan for Long Bridge Park but not part of the county’s current capital plan, the second half the the facility would push the overall cost well north of $100 million. One rough estimate, taking into account the per-square-foot cost of a recently-built Arlington community center and the per-parking-space cost of a recently-built underground garage, puts the Phase 4 cost around $60 million. At that point, the fully-realized facility would be considerably pricier than the priciest Arlington high school, the recently-completed $113 million Wakefield High School.

Other local jurisdictions have been watching Arlington’s handling of the Long Bridge Park aquatics center with interest. Town Council members in Vienna are so far opting not to include a pool in a proposed expansion of the Vienna Community Center, citing the ballooning costs of Arlington’s aquatics center, according to the Sun Gazette.

Community leaders in Reston are also putting plans for an indoor pool facility on hold and citing Arlington as a cautionary tale.

“The situation at Long Bridge Park in Arlington illustrates perfectly that the longer you are undertaking a project, there is a larger potential for the scope of planning to outstrip your resources,” said Reston Community Center Executive Director Leila Gordon, as quoted by Reston Now. “The cost of construction goes up.”