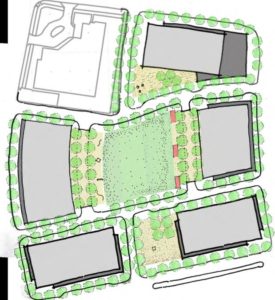 After five and a half hours of discussion and deliberation, the Arlington County Board on Saturday unanimously approved a framework for Vornado’s massive PenPlace development in Pentagon City.

Located on a 10.2 acre parcel of vacant land once proposed as a site for the Nationals baseball stadium, the development will include five buildings between 16 and 22 stories high, and more than 2 million square feet of total floor area. The buildings will be mostly commercial office towers — including one secure office building — plus a 300-room hotel and an option for a 300-unit residential building in lieu of one of the office towers.

Despite 25 public meetings on the development proposal, including 17 Site Plan Review Committee (SPRC) meetings starting in February 2012, a vocal group of residents were still not sold on the project. Mostly hailing from Arlington Ridge and other residential neighborhoods around Pentagon City, they listed a variety of objections to the project, including concerns about additional traffic on neighborhood streets and the new buildings blocking monument views of D.C.

“The SPRC process was a charade — it was more like Chicago and less like Arlington,” said one resident. “The fix was in… it’s been fundamentally unfair. Please help us preserve the character of our neighborhood.”

“The heights are absurd… the 22-story building is going to look ridiculous down there,” said another. “I felt like we’ve been railroaded a bit. We don’t believe that adequate concern was given to Arlington Ridge Road traffic and 23rd Street traffic. We believe those are going to be jammed up.”

“Everywhere I see ‘car-free diet,” said yet another. “Who is the car-free diet for? Is it only for residents? Developers can apparently run as many cars as they want through our neighborhood.”

A “monumental planning mistake” and “a giveaway,” is how other opponents described the project. One speaker at Saturday’s meeting even proposed renaming the development “Tejada Place,” after the Board chairman, who he said he hoped would be voted out of office.

Vornado agreed to a host of community benefits in exchange for approval of the development framework. Among those benefits will be a 1.5-2 acre contiguous central green space, a future 20,000 square foot “community facility,” new sidewalks and bike lanes on Eads Street, a new street grid to break up the “superblock,” and a $15 million contribution from Vornado to the future Long Bridge Park Aquatics, Health and Fitness Facility.

Vornado managed to cobble together the additional density needed to supplement that already allowed by zoning via a combination of community benefits, density transfers from Arlington County (in exchange for the $15 million and a parcel of land that will be used for a potential streetcar maintenance facility), and bonuses for LEED Silver and Gold certification and a potential on-site district energy system.

Additional community benefits may be approved in the future. Each of the five buildings in the development will have to go through a final site plan approval and public review process, during which additional benefits may be proposed. The development is expected to be built out over the course of 15-20 years.