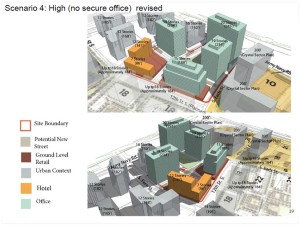 (Updated at 6:20 p.m.) Arlington’s Long Range Planning Committee (LRPC) is considering a plan to build a collection of tall office buildings and hotels on a large, vacant parcel of land in Pentagon City.

The “PenPlace” site, as it’s called, is a 12-acre parcel owned by Vornado/Charles E. Smith. Its only inhabitants over the past decade have been a Marriott Residence Inn, Nell’s Carryout and the occasional traveling circus. Once considered as a possible location for the new Nationals stadium or an “Arlington County Conference Center,” the site has laid fallow for years.

Last month the LRPC considered a number of possible uses for the site (all of which preserve the existing Marriott hotel and add new streets to break up the large “superblock”):

In the end, at least one member of the committee concluded that the “high density” plan — which includes nearly 1.9 million square feet of office space and a centrally-located open space — “seem[ed] to be most appropriate.” 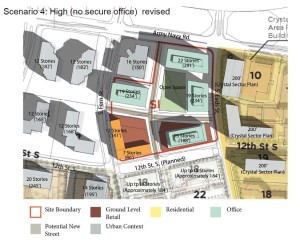 Only the baseline project, however, would be acceptable under the current Pentagon City Phased Development Site Plan (PDSP), which was first approved in 1976. The others would require the County Board to revise the PDSP before it could approve a site plan for the overall complex.

The nearby Aurora Highlands and Arlington Ridge civic associations, however, are both on record supporting the existing PDSP, which “does not allow for any more additional office development,” according to the latest Aurora Highlands Civic Association newsletter.

“Approving additional office buildings would severely change the planned vision for the Pentagon City Metro Station Concept Plan,” civic association officials wrote. “Because office buildings generate the most traffic and air pollution, impacts that would affect the health, safety, and general welfare of the public, this Metro station was planned for a Pentagon City with an emphasis on residential development and specifically limited office development as compared to the intense office development in Crystal City and Rosslyn.”

“Interestingly, the Virginia Department of Transportation has a nearly $3 million dollar ‘spot improvement’ project to widen the I-395 exit ramp onto Eads Street which will allow an easy flow to the [PenPlace] site,” the newsletter noted.

Tom Miller, Arlington County’s Acting Planning Director, declined to weigh in on the specifics of the PenPlace proposals, but did offer that Pentagon City has changed considerably since the PDSP was first approved.

“Good plans evolve and are reflective of changes in the community and the market,” he said.

The LRPC will discuss the PenPlace site again from 7:00 to 9:30 p.m. on Monday, Aug. 1, in room 311 of the county government building (2100 Clarendon Blvd). The committee’s findings will help guide Vornado as it decides on a final plan to submit for County Board approval.