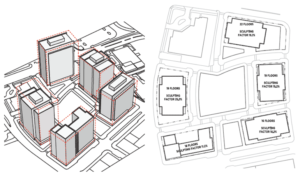 The Arlington County Board is scheduled to vote on the massive PenPlace development proposed for Pentagon City at its upcoming Saturday meeting.

County staff is expected to recommend the Board approve the project, though the official recommendation will not be made until after the county’s Planning Commission weighs in on the project. The commission is holding a carryover meeting to discuss the project at 7:00 tonight (Monday), after the discussion at its meeting on Sept. 11 went too late.

PenPlace has drawn opposition from residents who live in the neighborhoods that border Pentagon City. Members of the Arlington Ridge Civic Association have been particularly vocal, saying the traffic generated by PenPlace will be disruptive to the community.

To help reduce the number of car trips to and from the development, staff has proposed capping the number of office and retail parking spaces at 1,859 — or 1 for every 1,000 square feet of floor area. Setting a parking maximum would be a first for Arlington, which has traditionally focused on setting a minimum number of parking spaces for developments, according to county planning director Bob Duffy. Opponents of the project, however, would like to see even an even lower parking space cap.

“We have listened to the community, but there are still outstanding issues,” Duffy said.

Also proposed in order to reduce car trips: a traffic demand management system, new bike lanes, and a streetcar stop. One side of the development faces the future streetcar tracks that will run along 12th Street S. The project is also a block away from the Pentagon City Metro station.

PenPlace has gone through an extensive community process, including some 25 public meetings, possibly a record for Arlington. The county’s Site Plan Review Committee alone met 17 times between February 2012 and July 2013 to discuss the project and help find a middle ground between developer Vornado and local residents.

Even if approved this coming weekend, Vornado isn’t expected to start building the PenPlace right away. It could be 15-20 years until the company completes all the proposed buildings in the development, said Duffy.