Construction on the Long Bridge Park Aquatics, Health and Fitness Facility is expected to begin this fall.

The $80 million facility is to be built just north of Crystal City in Long Bridge Park. IT will feature a 50 meter by 25 yard fitness and competition pool, a family leisure pool, a hot water therapy pool, a “teaching pool,” and a “free-form water play area that will… have a lazy river, slides, play features, and a zero-depth ‘beach’ entry.” 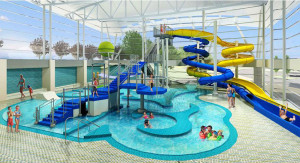 The operating costs of the facility are estimated to be $3.2 million per year, some $2 million to $2.8 million of which will be offset by revenue generated by usage fees, memberships and snack sales.

A second phase of construction on the facility is also planned. That phase will result in an addition to the facility, featuring amenities like a gym, an exercise facility, a climbing wall, an indoor track, racquetball courts, and meeting rooms.

The second phase of the Aquatics, Health and Fitness Facility has yet to be included in the county’s Capital Improvement Plan, and is likely more than a decade away.

“A time frame for design or construction is not projected prior to calendar year 2023,” said parks department Planning Supervisor Erik Beach. So far, there’s no cost estimate for the second phase of the facility.