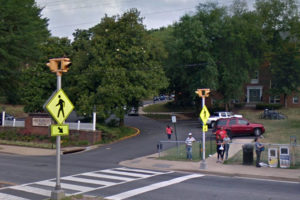 Arlington County Police are investigating yet another attack of a woman who was walking alone at night.

The incident happened on the 800 block of S. Frederick Street around 10:30 last night (Thursday) and is the fifth such attack in the past month.

“An unknown male subject carrying a stick grabbed a female victim’s wrist and attempted to drag her into the woods,” according to a crime report. “The suspect fled with the victim’s cellphone after she screamed for help.”

“The suspect is described as a Hispanic male in his twenties, approximately 5’5″ tall, with a slim build and short hair,” the report continues. “He was wearing black pants and a black shirt at the time of the incident.”

The nature of the attack, the description of the suspect and the fact that he was scared off by the victim fighting back are all at least somewhat similar to four other such attacks that have happened since July 25.

Police are “not willing to say… just yet” whether any of the attacks are related, but Special Victims Unit detectives were planning to talk to the victim today to gather additional details.

A police spokesman said ACPD has been stepping up its efforts to catch the alleged predator or predators who have been perpetrating these recent attacks, but the department can use tips from the public.

“We’re going to continue to put resources on the streets, in a plain clothes capacity along with additional patrol officers,” said Dustin Sternbeck. “We are looking for the public’s assistance with this as well.”