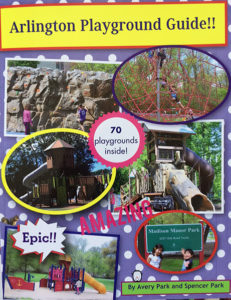 Chestnut Hills playground at 2807 N. Harrison Street is the best playground in Arlington, at least according to a new guide to the county’s playgrounds.

H.K. Park and his two children, Avery and Spencer, created “The Arlington Playground Guide!!,” a review book of 70 playgrounds in the county.

The Parks visited each playground, excluding ones at schools, and ranked them on the different features, like how challenging the playground was, how much shade each has and if it had bathrooms, Park said.

Each playground was giving a ranking out of five stars, with five stars denoting an “epic” experience.

“For a small county, there are a lot of playgrounds,” Park noted.

“Cool! This is really big but not shady. It was super hot but it was worth it,” Avery Park, 9, wrote in the book. 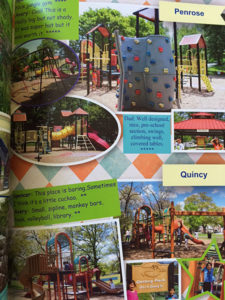 Avery and Spencer liked the bigger playgrounds, Park said. They also liked ones with swings and seesaws, as well as newly-installed equipment.

The playground at Quincy Park (1021 N. Quincy Street) received two stars from the Park kids, who wrote it was too small.

“This place is boring,” Spencer wrote. “Sometimes I think it’s a little cuckoo.”

Park also included “Dad views” for each playground, which looked at the amount of shade at a park or how many bathrooms it had.

Park gave a copy of the book, which contains pictures of each playground, to Arlington Public Library. Families can also request a copy from Park, he said.