(Updated on Aug. 27 at 10:50 a.m.) Might a monorail-like system be the solution to Columbia Pike’s transit woes?

The Columbia Heights Civic Association is holding a meeting on Sept. 28 to discuss JPods, a transit system that uses suspended railcars, as a possible solution for Columbia Pike in light of the cancelled streetcar.

“We’re excited about this possibility,” said Sarah McKinley, one of the Columbia Heights Civic Association Board members.

The owner of JPods, Bill James, has looked at the Pike and thinks it is a good location for the gondola-like system, McKinley said. 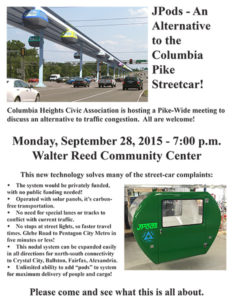 JPod users would get into a pod at a station and then program in an address for where he or she wants to go.

“Think of it like a chauffeured car,” James said.

There could be several hundred to 1,000 pods on the Columbia Pike network. There is a possibility of turning the transit system into a grid, with JPods running from Columbia Pike to Metro stations and other parts of Northern Virginia, he said.

The solar-powered pod system would be privately funded, according to James. The JPods website lists the average cost for installing a network as $10 million, though there’s no word on how much it might cost to construct along the Pike.

Before the project was canceled, the cost of the five mile Columbia Pike streetcar line was estimated at $358 million.

If JPods were approved for Arlington, a network could be built along the Pike in a year, James said.

“[With JPods] you’ll be able to get around most cities like [you can in] New York, without cars,” he said.

Arlington County has been “made aware” of the JPods system, said Dept. of Environmental Services spokesman Eric Balliet.

“It’s too early to comment on it because we have not received any detailed technical or cost information that can be evaluated,” he said. “The JPod information we have seen says it would not require any public funding.”

Arlington County does not expect to decide on an alternative transit plan for the Pike until next year.