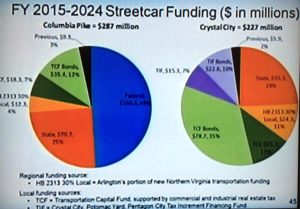 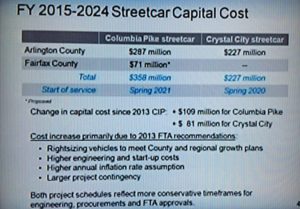 (Updated at 5:55 p.m.) The combined cost of the Columbia Pike and Crystal City streetcar systems is now estimated at $585 million.

Presenting an overview of her proposed FY 2015-2024 Capital Improvement Plan to the Arlington County Board this afternoon, County Manager Barbara Donnellan and her staff said that the cost of the streetcar systems had risen $190 million from the 2013 CIP due to changes in the size of the streetcar vehicles, higher engineering and start-up costs, higher inflation and a larger project contingency.

Nearly 75 percent of the financing for the Columbia Pike streetcar is projected to come from federal and state sources. Most of the funding for the Crystal City streetcar will come from dedicated county transportation funding or bonds, with a portion coming from the state but no funds coming from the federal government. The CIP does not anticipate issuing general obligation bonds for either streetcar system — without which the county would need state legislative approval in order to conduct a referendum on the streetcar systems.

The $585 million price tag is the latest projected cost increase for the controversial Columbia Pike project. Initially pegged as a $161 million project in 2007, that number jumped to around $250 million in 2011. Last spring, the Federal Transportation Administration rejected a county grant application for funding because it estimated the project’s cost between $255.9 million and $402.4 million. At the time, a contractor estimated said $310 million was “a most likely cost” for the streetcar.

Arlington County’s latest transit ridership projection suggests that ridership along the Columbia Pike and Pentagon City-Crystal City corridors will double, to nearly 60,000 daily transit trips, by 2035. Most of those trips will be on a streetcar, the county said. The Columbia Pike line alone is projected to increase real estate values by $3.2 to $4.4 billion and generate between $455 and $895 million in additional tax revenues for Arlington and Fairfax counties over a 30-year period.

The total CIP for the next 10 years calls for $2.7 billion in investment, more than half of which is dedicated to transportation projects, including the streetcar. Donnellan’s proposed CIP now will now be considered by the Board, which will conduct work sessions and hold a public hearing on June 10 before a planned adoption on July 19.

In addition to the streetcar investment, the county plans to spend $128 million over the next 10 years on repaving roads, a jump from previous years after the county assessed that 60 percent of its roads were deemed susceptible to more frequent potholes. Donnellan also recommending spending $170 million over the next years on maintenance of the county’s water and sewer system, much of which is more than 50 years old.

Among the notable projects highlighted by county Chief Financial Officer Michelle Cowan was the replacement of the Lubber Run Community Center with an updated facility. Residents of the area were concerned by a proposal to turn the community center into affordable housing.

Other projects include $25 million for replacing the Fire Station 8 at 4845 Lee Highway and $52 million in new parks investments.

“This is the first time we’ve seen this document just like anyone else,” County Board Chair Jay Fisette said after Donnellan’s presentation. “We now engage in a very robust conversation with the community.”