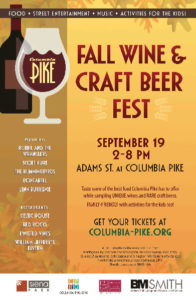 The event runs from 2-8 p.m. on Saturday, Sept. 19 on S. Adams at Columbia Pike, near Taqueria Poblano.

“We want to have a lot of fun with the community,” said Takis Karantonis. “We started the summer with a festival and we wanted to close summer with one as well.”

For $25 a ticket, each attendee will get 12 wine tastings, eight craft beer tastings and tastings of food from Pike restaurants William Jeffrey’s Tavern, Red Rocks Arlington and The Celtic House Irish Pub and Restaurant.

Wine will be selected by Jason McKechnie of Twisted Vines Bottleshop and Bistro, and William Jeffrey’s Tavern’s Logan Skidmore will choose the craft beer.

“Kids and grownups will be happy with the quality of the food. It’s not dumbed down carnival food,” said Christine Hopkins, who helped plan the festival.

Beer selections will be unique to the festival — not be the craft brews that are offered every day at William Jeffrey’s, Karantonis said.

There will also be live music throughout the entire event, with local Pike band the Boxcartels playing from 4:15-5:15 p.m.

CPRO wants to start holding more fall events, Karantonis said, adding that fall on the Pike is typically a quieter than the summer.