Karen Bate, founder of communication firm KB Concepts, was part of multiple entrepreneurial groups in Arlington, but none were just for women. So she decided to start her own organization, now called Arlington Women Entrepreneurs.

The group has quickly grown since it started in 2014, with the 100th member having just joined the group this week, Bate said.

“I just know all these amazing business owners,” she said.

Bate started the group with an event for women entrepreneurs, inviting her friends and people she worked with to come to her house and bring other business owners. She expected it to be a small gathering, but had a large group of people show up on her doorstep.

“They were so happy to have a place where they could share their experience as solo business owners,” Bate said.

From the first event at Bate’s house, Arlington Women Entrepreneurs became a group of women who meet monthly to network and talk about running businesses.

The group is capping itself at 100 members and does not accept more than five members in each industry to allow the meetings to be useful for each member, according to the group’s website.

There is already a waiting list, as there are at least five industries that have five members, Bate said.

“I have such an interesting group of women,” Bate said.

Members include a woman who does mobile veterinary calls, artists, boutique owners, graphic designers, restaurant owners, include the women behind Lebanese Taverna, Trade Routes, Two the Moon and Nicecream Factory.

Meetings take place in member homes or businesses and include time to socialize with each other and a speaker who talks about some aspect of owning a business. 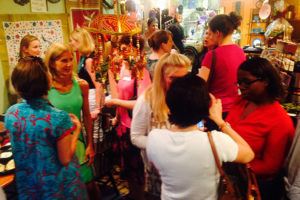 Meetings give the women a chance to chat with one another, and most talk about being entrepreneurs and share their experiences, Bate said.

“They talk about a variety of things, but a lot of them talk passionately about their businesses,” she said.

At the meetings, the female business owners are also able to collaborate with each other on their businesses or find ways to give back to the community through various service projects, Bate said.

Helping each other is one thing that Bate has noticed about working with female business owners.

“I believe women owners are extremely generous about supporting one another,” she said.

Members brainstorm and collaborate with the other women in their industry, which helps the women come up with new ideas or solve challenges facing their businesses, according to AWE’s website.

Starting a new business can be challenging, Bate said, adding that she has found many women do it for the flexibility. Arlington County is very welcoming to new businesses, and some of the speakers at meeting are people involved with the county’s initiatives to help businesses, including the Chamber of Commerce, Leadership Arlington and Arlington Economic Development.

“I can’t say enough about how supportive Arlington is with starting new businesses,” she said.

Taking the leap and starting a business can be challenging, Bate said, adding that she had a lot of support from her family, who were also all entrepreneurs.

Working with women of AWE, Bate has noticed that many of the female business owners share similar traits, beyond wanting more flexibility with work, she said.

“Studies and anecdotal evidence reveal that many were not your traditional stellar students or over-achievers. A majority weren’t motivated by good grades or the approval of others, in school or in their early jobs and careers. Instead, they found what motivated them, followed their own path, and turned that inner need into a thriving business,” Bate said on her blog.