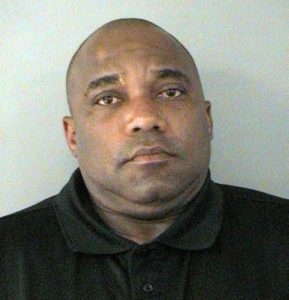 Arlington County Police have arrested a suspect in the robbery of a bank in Clarendon earlier this week.

The TD Bank at 3101 Wilson Blvd was robbed Wednesday morning by a man who passed a note to the teller stating he had a weapon.

Police arrested 48-year-old Keith Burke yesterday afternoon after he exited the Crystal City Metro station. Police say Burke was “found in possession of a note similar to the one he passed the TD Bank teller.”

A bank robbery suspect was taken into custody by the Arlington County Police Department, with assistance from the Metro Transit Police Department, in the 200 block of S. 18th Street. Keith Burke, 48, of Washington, D.C., was arrested at approximately 2:00 p.m. on September 17, 2015 as he exited the Crystal City Metro station.

Burke was charged with bank robbery and is currently being held without bond. At the time of Burke’s arrest, he was found in possession of a note similar to the one he passed the TD Bank teller implying he had a weapon and demanding money.

At approximately 10:30 am on September 16, 2015, the Arlington County Emergency Communications Center was alerted of a bank robbery that had just taken place at the TD Bank, located in the 3100 block of N. Wilson Boulevard. The suspect remained at-large for a little over twenty-four hours.

“Our detectives were able to identify and locate this suspect in a timely manner as a direct result of our outstanding relationship and the ability to share resources with our partners at Metro Transit Police Department,” comments Daniel J. Murray, Deputy Chief of Criminal Investigations Division for Arlington County Police Department.