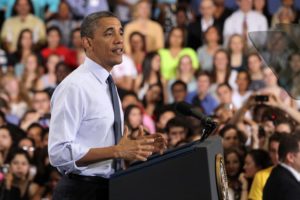 President Obama will be traveling to Fort Myer this afternoon, according to the president’s official White House schedule.

The visit to the military base next to Arlington National Cemetery will come after the president holds a joint press conference in the White House Rose Garden with Chinese president Xi Jinping.

“Later in the afternoon, the President will deliver remarks at an Armed Forces Full Honors Retirement Ceremony in honor of General Martin Dempsey,” the president’s schedule says.

The president is expected to arrive at the base via motorcade, assisted in part by the Arlington County Police Department.