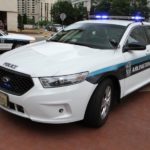 Police say a 26-year-old man suffered two large wounds after being struck in the face with a wine bottle.

MALICIOUS WOUNDING, 151010037, 4000 block of N. Lorcom Lane. At approximately 9:30 p.m. on October 10, a 26 year-old male victim was struck in the face with a wine bottle during a BBQ, causing two large lacerations to his head. The victim was transported to Virginia Hospital Center with non-life threatening injuries. Melissa Michelle Fredericks, 43, of Arlington VA, was arrested and charged with malicious wounding.

MALICIOUS WOUNDING, 151011048, 2900 block of S. Glebe Road. At approximately 10:50 p.m. on October 11, a 50 year-old male victim was stabbed twice by a known acquaintance following a physical altercation. The victim was transported to the George Washington University Hospital with non-life threatening injuries. Warren F. Malcolm, 51, of Arlington VA, was arrested and charged with malicious wounding. He is being held without bond.

ATTEMPTED SEXUAL ASSAULT, 151010020, 2500 block of S. 9th Road. At approximately 12:30 p.m. on October 10, an unknown male subject attempted to kiss a 38 year-old female victim in an elevator. The suspect is described as a black male in his forties, approximately 5’10” and weighed 180 lbs. He was wearing a black coat and had a black duffel bag at the time of the incident.

CARJACKING, 151008051, 1600 block of N. Fort Myer Drive. At approximately 6:40 p.m. on October 8, a male subject entered the passenger seat of a female victim’s vehicle. The 56 year-old female victim fled her vehicle and screamed out for help, causing bystanders to intervene until officers arrived on scene. Michael Thesing, 19, of Oakwood, OH, was arrested and charged with carjacking. He is being held without bond.

BREAKING & ENTERING, 151007069, 5800 block of N. 16th Street. At approximately 8:35 p.m. on October 7, an unknown subject was seen attempting to gain access to a shed in the backyard of a residence. The residents confronted the subject causing him to flee. The suspect is described as a white male in his twenties, approximately 5’6″ tall and weighing 150 lbs. He was wearing a black long sleeve shirt, black pants, and was carrying a big black bag.

Next
Open Houses in Arlington This Weekend