One year ago, the owners of Green Flash Brewing Co. and Alpine Beer Company announced that their breweries were merging. Around this time, Green Flash ranked 48th among craft breweries in the U.S. in brewing volume according to the Brewer’s Association. They weren’t huge, but they were a good sight larger than Alpine who employed 20 people.

Their business relationship had begun a year earlier when they entered into a “handshake agreement” to have Green Flash brew and package some of Alpine’s beers. This agreement doubled Alpine’s production from 1,500 bbl to 3,000 bbl. So successful was 2013-14 for both breweries that they decided to take their relationship one step further. 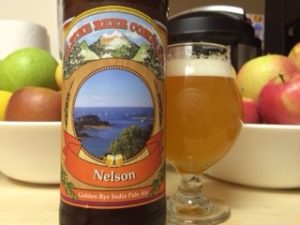 Joining forces, while allowing each company to continue operating independently, supports an environment in which two world-class breweries can co-exist and thrive. Their excellence is evident on beeradvocate.com — each brewery routinely earns a score of 90 or greater. What’s better, is that Alpine — a brewery that was previously only local to San Diego — can now share it’s coveted beers with the same markets that enjoy Green Flash.

It can be fun getting your hands on a beer than can only be found in the Russian River Valley or in rural Vermont. What I prefer is enjoying a superb beer that I bought in my own back yard. Alpine and Green Flash have proven that they can scale up their winning formulas. Now, we can all benefit.

Check out these three Alpine beers and more at Dominion Wine & Beer.

Brewed to celebrate hoppiness and to keep the party going, Alpine’s Hoppy Birthday is a session IPA. The relatively low ABV of this beer allows the huge hop flavor to shine without all the alcohol of a standard IPA. For those who like the way that hops can bring the bitterness, this beer will be a welcome assault on the tongue. 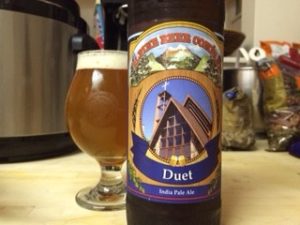 Duet is Alpine’s own West Coast IPA — a modern classic with a blend of Simcoe and Amarillo hops. The combination of hops lends this beer a nice balance of piney aroma and hop flavor. This is a finely crafted, hop-forward IPA that has just the right amount of sweetness from the alcohol. It’s full of flavor and immensely drinkable.

Made primarily with generous amounts of the New Zealand hop, Nelson Sauvin, in both the brewing and dry-hopping this IPA packs quite a hop punch. The rye in the name refers to European rye, which is used as part of the grain bill — it brings both a smooth maltiness and a peppery spice that complements the bitterness of the hops. Nelson’s reputation preceded it’s availability in this area when The Washington Post made Nelson it’s Beer of the Week earlier this summer.