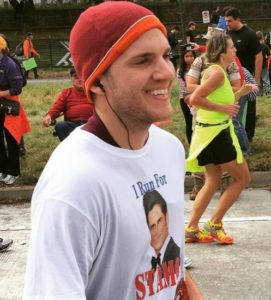 A born-and-raised Arlingtonian is asking a celebrity to “have mercy” on him and join his wedding party, all because of a bet.

Brendan Hurley currently lives in Ashton Heights and got engaged back in January.

However, not long before he proposed, the 29-year-old bet a friend $20 he could get John Stamos to be a groomsman in his wedding. The friend accepted the bet, and Hurley has made it his mission to win.

“I got engaged after I made the bet, and my fiancé told me she had picked six bridesmaids,” Hurley recalled. “I remembered Stamos, so I got six of my friends to sign up and told one specifically that if Stamos shows up, he’s out.”

Hurley added that sixth friend isn’t particularly happy with him, and his bride-to-be isn’t thrilled either.

Hurley’s making several efforts to bring Stamos to Virginia for the big day in May 2016.

The first step was getting active on Twitter — something Hurley said he would never do — by directly tweeting at the Full House celebrity. He’s used the social media platform to recruit the support of some friends and a John Stamos fan page.

He also started a blog that he updates periodically. Some of the posts mention reaching out to bigger media outlets like BuzzFeed and The Ellen DeGeneres Show. 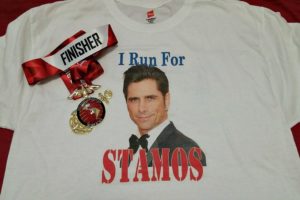 The most recent entry was about Hurley completing this year’s Marine Corps Marathon while wearing a custom shirt that he designed and La Tee-Shirt on Lee Highway printed.

“That shirt got a lot of hooting and hollering,” Hurley said. “I think that’s going to be my racing shirt from now on.”

Hurley even offered to buy his plane ticket and give him the $20 for winning the bet if he shows up.

Despite his efforts, the celebrity hasn’t responded… yet.