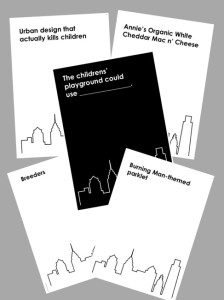 A playable parody of the popular, irreverent card game “Cards Against Humanity” is getting an Arlington spin.

Cards Against Urbanity was created by some local planners, architects and economic development professionals to get players thinking about urban planning while poking fun at the cities they live in.

The game, which was inspired by Arlington, is now getting its own local edition, just in time for an event in Courthouse tomorrow night.

Arlington Cultural Affairs is hosting a Cards Against Urbanity game night Tuesday from 5:30 to 7:30 p.m. at Courthaus Social (2300 Clarendon Blvd), the restaurant where Lisa Nisenson and her co-creators decided to make the idea for the game a reality.

“I’m a longtime civic activist, so I know how frustrating it is to try and learn all the things about how the city works, so that’s where this came from,” Nisenson said. “We just want people to have a good time and get to know their community in a creative way.”

The deck used during the game night will include some new cards specifically relevant to Arlington.

Players could come across black question cards with prompts like “The tolls on the I-66 should be used to fund ____” and “Arlington is world famous for ____.” We’re told there may also be a card referencing the ARLnow.com comment section.

Some of the white cards address relevant community issues and in-jokes with answers like “Cardboard classrooms” and “Brown flip flops.”

These cards were added to the original deck distributed to backers last year after the game’s Kickstarter campaign exceeded its goal. Nisenson said some of the original cards — including “A desire named streetcar” — could apply in the local edition of the game.

Guests in the crowd will also have the opportunity to make suggestions for new cards.

“We want people to be really clever,” Nisenson said. “We hope to add the best, most clever suggestions to Arlington’s deck.”

The event is free and appropriate for all audiences. Snacks will be provided, and there will be a cash bar.

This is the first of three game nights in Arlington. The next one scheduled for Jan. 12, with another planned for later in this spring.