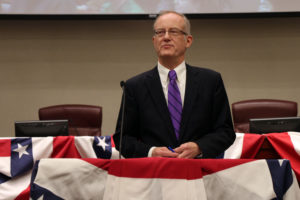 Members of the County Board were at odds at its Tuesday night meeting over a resolution that would support the federal government’s efforts to address responsible use of antibiotics in health care and food production.

The primary goal of the resolution is to “establish a tiebreaker preference in County procurement policies for the purchase of meat and poultry that has been raised according to responsible antibiotic use policies.”

The resolution also calls for working with Arlington Public Schools on a similar antibiotic policy, which would — other things being equal — prefer the purchase of responsibly produced meats for school lunch programs.

“Although Arlington County has few meat and poultry food contracts and does not purchase large quantities of these products, the preference created today signals to the marketplace the County’s desire to join the national effort to drive changes in food production practices that will create healthier alternatives and support public health,” the county said in a press release.

Board member John Vihstadt, however, opposed a specific paragraph of the resolution that said:

“Supports legislative efforts to prevent the nontherapeutic use of antibiotics in food production, such as S. 621, the Preventing Antibiotic Resistance Act of 2015 and H.R. 1552, the Preservation of Antibiotics for Medical Treatment Act of 2015…”

Vihstadt made a motion to strike the citations of specific federal legislation from the resolution, citing no Virginia senators nor members of Congress who are co-sponsors of either bill.

“We haven’t been briefed on this legislation, we have not seen the bills, and we haven’t — at least I have not — had any communication with our congressional delegation on these pieces of legislation,” he said at the meeting.

The motion to strike the citations failed, though Board member Libby Garvey also voted in favor of it.

“I don’t think we as a Board should be going on record supporting two specific pieces of federal regulation at this stage,” Vihstadt added. “There may be a time when we ought to do that, but I don’t think so at this stage.”

Board member Jay Fisette, who proposed the resolution, said the measures have been under consideration at least the past six months.

“We have done this before, and it’s not breaking new ground to identify a piece of legislation that this County, with its values, stands behind,” Fisette said.

The majority of the Board agreed, saying this would be an opportunity for Arlington to be bold and show local support for federal action before state legislators or other regional governments.

“This is about our health and our kids’ health,” Fisette added. “It’s making a statement and hoping to build and establish partnerships that allow the purchasing power of our government to help address a serious public health issue.”

The resolution passed, in its entirety, with a vote of 4-0-1. Vihstadt abstained.

“I would be supporting this for all the reasons Mr. Fisette and others have said,” he said before the vote, “were it not for the endorsement of two specific pieces of federal legislation.”