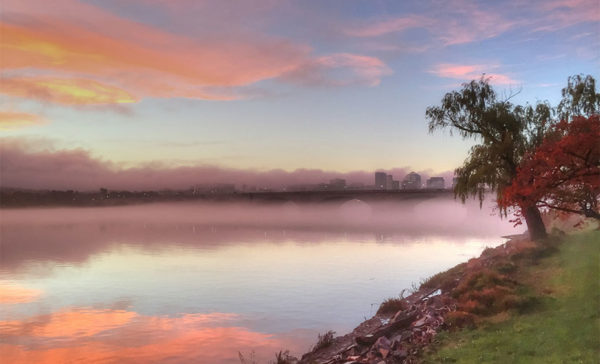 Board Debates Leftover Funds — County Board members John Vihstadt and Libby Garvey unsuccessfully tried to push for changes to the Board’s practice of spending money left over from the previous fiscal year budget with little public discussion. At its meeting last night, a split Board eventually approved the allocation of $21.8 million in “carryover” funds to various priorities. The Board also directed the county manager to develop a balanced budget with no tax rate increase. [Washington Post, Arlington County]

Georgetown Petitions FAA on Aircraft Noise — Earlier this year, the flight path of planes arriving at Reagan National Airport from the north was reportedly shifted from over parts of Arlington to over the Potomac River. That has sparked complaints from Georgetown residents and students, along with residents of other D.C. neighborhoods, who say that aircraft noise has increased and is disrupting their lives. [Georgetown Voice]

County Adopts ‘Zero Waste Resolution’ — Arlington is now the first community in Virginia to adopt a “Zero Waste Resolution.” When such an action is funded, the county will work to develop a plan for diverting “90 percent of the community’s waste away from landfills or waste to energy facilities by 2038.” County Board Chair Mary Hynes said the resolution “is the first step in what will need to be a broad community discussion.” [Arlington County]

Man Says Towing Co. Damaged Car — Cody Chance, an employee of the soon-to-open Sehkraft Brewing in Clarendon, says Advanced Towing butchered his bimmer during a mistaken tow. Chance says there’s no doubt Advanced caused $1,200 in bumper damages and scratches to his BMW. The towing company contends that the tow was not an error and the damage claims are false. [NBC Washington]

Startup’s Sweet Arlington Digs — LiveSafe, a Rosslyn-based college security software and app startup, has a Millennial-friendly office setup that includes a neon-lit bar, a dart board, whiteboard walls and views of the Potomac. [DC Inno]

Koch Bros Have Intelligence Unit in Courthouse — The conservative political network of Charles and David Koch “has quietly built a secretive operation that conducts surveillance and intelligence gathering on its liberal opponents.” The 25-employee intelligence team is based in Courthouse, along with other Koch network offices. [Politico]