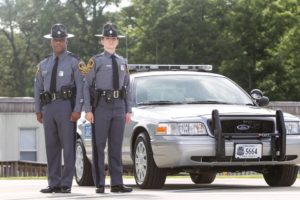 Traffic deaths are up this year in Virginia, and Virginia State Police will be out in force during one of the biggest travel holidays of the year to try to tamp down on dangerous driving.

State police say 652 lives have been lost on Virginia’s roads and highways this year, compared to 633 at this time last year.

“State police are very concerned about the safety of the Commonwealth’s highways,” VSP said in a press release (below, after the jump). “To counter the increase in traffic crashes and fatalities caused by speeding, impaired driving and failure to use occupant restraints, state police will once again be participating in the Operation Combined Accident Reduction Effort (C.A.R.E.).”

VSP says motorists can expect to see an increase in troopers on the road between today and Sunday night.

With travel forecasts calling for a record volume of Thanksgiving week traffic, the Virginia State Police are issuing a challenge to all drivers and passengers – Drive to Save Lives.

During the 2014 Thanksgiving holiday counting period, eight fatal traffic crashes claimed eight lives. That was Virginia’s lowest death toll for a Thanksgiving weekend in over a decade. But, with current reports showing the 2015 fatality rate for Virginia at 652 lives lost compared to 633 this time last year*, state police are very concerned about the safety of the Commonwealth’s highways. To counter the increase in traffic crashes and fatalities caused by speeding, impaired driving and failure to use occupant restraints, state police will once again be participating in the Operation Combined Accident Reduction Effort (C.A.R.E.), a state-sponsored, national program.

“State police will have the majority of its uniformed workforce on patrol from Wednesday through Sunday of the Thanksgiving holiday weekend,” said Colonel W. Steven Flaherty, Virginia State Police Superintendent. “Our goal is not to see how many summonses can be issued and traffic violators arrested over the holiday. The purpose of having our troopers out there on Virginia’s highways is to remind the motoring public of the importance of traffic safety, and to deter aggressive, dangerous, reckless, and impaired driving. We are prepared to do our job to make Virginia safer and we thank those people already driving to save lives. But, as evident by the spike in traffic deaths this year, we still need more drivers and passengers to do their part by buckling up, complying with speed limits, sharing the road, and never driving impaired or distracted.”

Motorists can expect to see an increase in troopers throughout the Commonwealth beginning Nov. 25, 2015, at 12:01 a.m., and continuing through midnight Nov. 29, 2015. As a result of drivers failing to obey the law during the 2014 Thanksgiving holiday in Virginia, state troopers had to stop and cite 9,856 speeders and 2,315 reckless drivers. In addition, 706 adults were cited for failing to buckle up as required by state law. Troopers also issued 206 citations for child safety seat violations. A total of 91 drivers were arrested for DUI.

Virginia State Police are also participating in the ongoing national Click It or Ticket Mobilization, which concludes the Monday after Thanksgiving (Nov. 26, 2015). Of the eight who died last year in traffic crashes over the Thanksgiving holiday weekend, six were not wearing seat belts. Virginia is aiming to achieve a seat belt use rate of at least 82.1 percent in 2015.

With the increase of emergency personnel on the highways, Virginia State Police reminds drivers to comply with Virginia’s “Move Over” law. A life-saving law intended to protect public safety responders and others who have a responsibility to work the roads. Drivers are required to change to another travel lane or, when unable to, to cautiously pass emergency personnel stopped on the side of the road. The law also includes highway maintenance vehicles and tow trucks equipped with flashing amber lights.