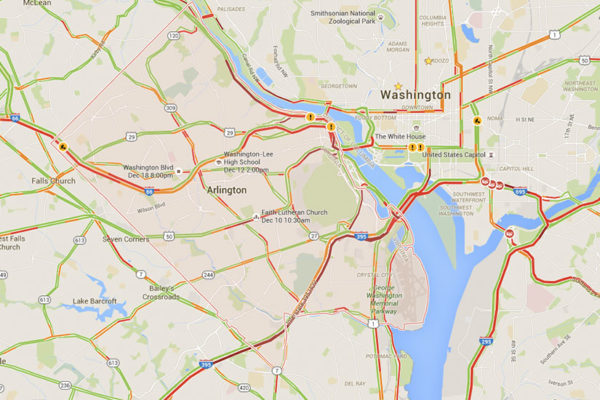 The Tuesday after Thanksgiving (and first day of December) is proving to be a turkey in terms of traffic.

Steady rain and accidents have helped to slow the commute to a crawl across much of Arlington.

On I-395 at 9 a.m., nearly the entire length of inbound I-395 was slow. I-66 is reported to be backed up all the way to Falls church. And the GW Parkway is a slog starting at the first overlook.

A reader reports that Route 50 was no picnic, either.

.@ARLnowDOTcom traffic on rt 50 into DC is backed up to Washington Blvd

Elsewhere, minor flooding was reported in the area of Chain Bridge. Expect the rain to continue throughout the morning, forecasters say.

Big, solid area of rain over DC region. A washout for next several hours. pic.twitter.com/PURVBrB6Hn